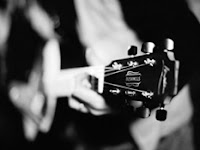 Bushmills - Casks make good music
The Irish single malt brand of Bushmills has partnered up with world famous luthier, George Lowden, to create three handmade guitars from oak casks used in the whiskey making process. George Lowden Guitars (which like Bushmills is based in Northern Ireland) have made guitars for famous names such as Eric Clapton, Van Morrison and The Edge from U2.

Each guitar took George Lowden and his team of craftsmen more than three months to make and presented some unique technical challenges. The oak used was from ex-Oloroso sherry casks, used in the making of Bushmills' Black Bush, 16 years old and 21 years old. The nature and curve of the whiskey barrel oak meant that each stave of wood had to be sanded by hand to the necessary thickness and required shape. Each stave was then glued together to create panels that retained the contours of the original whiskey barrel.

These panels rested in the workshop for several weeks as the wood bound together, before they were hand-cut by George Lowden using his 40 year old guitar templates. Then, using hand-tools such as Japanese chisels, planes and knives, the team at Lowden assembled the guitars - the result is three guitars unlike any others ever made. To find out more about Bushmills and to see a gallery of images of the making of the Lowden Guitars - log on to facebook.com/bushmills1608. 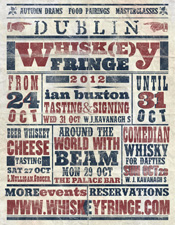 Dublin Whiskey Fringe
If you are in Dublin over the next few days, then it may be worth taking in some of the events in the inaugural Dublin Whiskey Fringe Festival. The new festival is designed for both novices and whiskey fanatics with events designed to celebrate this fascinating and increasingly popular spirit.

Events include a talk by whisky writer Ian Buxton, a tasting with Beam Global, an Irish whiskey, cheese and beer evening, plus stand up comedy. The venues for events include Bowe's, Brookes Hotel, O'Neill's (Suffolk Street), Palace Bar and W.J. Kavanagh’s. For more information on all events and how to book tickets - visit www.whiskeyfringe.com.

Isle of Jura -Penny for your thoughts?
The single malt brand from the isle of Jura is launching its biggest ever online competition. The Jura Win a Million Pennies competition is inspired by the ancient superstition - "see a penny, pick it up, and all day long you’ll have good luck". The 'good luck' here is a chance to win a million pennies, which mounts up to a cool £10,000. To enter couldn't be easier - simply visit the www.jurawhisky.com and answer the competition's simple question. In addition to the first prize, thirteen other entrants will win a bottle of Jura's Superstition single malt. The competition will run until 23 December.  All entrants must be UK residents. 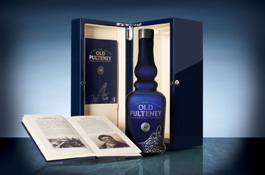 Old Pulteney - Life begins at 40
The most northerly distillery on mainland Scotland have proudly announced the launch of their oldest and most exclusive bottling ever - the Old Pulteney 40 years old.  The casks have been maturing in the distillery's warehouses in the fishing town of Wick for the duration of the four decades.

The new expression has been constructed from four casks (three ex-sherry Spanish oak and one ex-bourbon American oak), which were personally selected by distillery manager Malcolm Waring.  These four casks have yielded just 493 bottles - these are bottled at the cask strength of 53.1% ABV and the whisky is non chill-filtered and of natural colour.  The Old Pulteney 40 years old will be available globally in selected whisky retailers from early November and has a recommended retail price of £1490 (€1800).

The whisky is presented in blue crystal glass bottle, which have been designed and hand blown by The Tudor Crystal Design Company.  The bottle also features melted silver that has been blown across the glass while molten to form a wave design.  The stopper on the bottle is made from local stone and has been fashioned by Caithness Stone Industries.  It is presented in a highly lacquered wooden blue box, complete with a commemorative booked signed by whisky expert Charlie MacLean.

posted by Whisky For Everyone at 8:07 PM