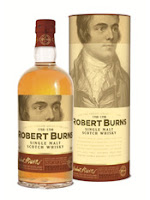 The Robert Burns is a new single malt bottling from Isle of Arran Distillers.  The whisky pays homage to Scotland's famous poet, who lived within view of the island, and wrote such legendary literary works as Address To A Haggis, Auld Lang Syne and Tam o'Shanter.  The distillery are patrons of the Robert Burns World Federation and the whisky is a mix of different ages of Arran malt matured in ex-bourbon and ex-sherry casks.  It has been bottled at 43% ABV, is priced around £30 and available to buy from specialist whisky retailers and www.arranwhisky.com.

Arran is one of the youngest single malt whisky distilleries in Scotland. It was founded by an independent group in 1993.  Production began in 1995 and uses many traditional techniques. The first single malt whisky released in 1998 - now the core range of whiskies is ever expanding and gaining recognition and prizes around the globe.. The distillery is located on the isle of Arran, which lies between the Campbeltown peninsula and the west Lowland coast, near to the village of Lochranza. It became the first legal distillery on the island since the 1840s.  Arran is also one of Scotland's smaller distilleries with a production capacity of 750,000 litres per year.

Our tasting notes
The colour is a pale golden yellow, almost lemon yellow, and the nose is delicate and sweet.  There is an immediate aroma of sweet malty cereal grains and this is quickly joined by some honey, vanilla and brown sugar.  With time further aromas of subtle green pear and crisp apple, cinnamon and nutmeg appear, plus a hints of dried grass and orange zest.

On the palate, this again on the delicate side with an instant distinct sweetness.  This sweetness is driven by plenty of honey and vanilla notes.  There is a slight tangy quality that immediately follows this sweetness (think of candied orange peel).  After this the whisky softens out to become quite creamy, mellow and soft, but there is still plenty going on.  At this stage the vanilla has changed to become more reminiscent of vanilla custard.  Some malty cereal notes add to the softness which is lifted by elements of crisp green apple and pear, plus a good pinch of baking spice (imagine cinnamon and nutmeg especially) and the returning tangy candied orange.

The finish is quite short and mixes distinct honey and vanilla-like sweetness with some pleasant and slightly drying wood spices (cinnamon especially again).  Late notes of spiced orange and malty cereals add depth and it is the cereals in particular that is the last flavour to fade.

What's the verdict?
Arran have done a good job with this Robert Burns whisky.  It is a lovely single malt that has a good level of luscious sweetness that is balanced by the cereal and spicy notes. It is not one of the most complex of whiskies, but what you have here is a good single malt that is expressive and very easy (and very enjoyable) to drink.  It offers great value for money and has been added to our ever increasing shopping list.