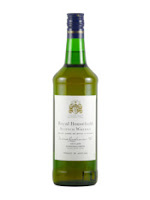 A couple of months ago Matt C and I were invited to a tasting hosted by Diageo to showcase some of the very successful blended whiskies they have for sale in other markets aside from the UK. One of the whiskies we both took a shining to was Royal Household, part of the Buchanan’s stable of blends, a very successful range that sells in the millions in territories such as South America and Asia.

Royal Household is only available in Japan, but was originally created by James Buchanan in 1900 to supply the British Royal household with whisky (must’ve taken him ages to come up with a name). The Royals liked the whisky so much that they took 100 cases with them on their world tour (rock ‘n’ roll) in 1901.

In 1923, with Buchanan’s already a well known brand in Japan and the Japanese Royal family one of their many customers, a bottle of the extra-special-limited-for blue bloods only Royal Household was presented by the British Royal family to Crown Prince Hirohito of Japan on his state visit to Britain. Eventually the whisky became more widely available to the hoi polloi but at some point Royal Household was withdrawn from the UK market and is now exclusively sold in Japan by special permission of the British Royal family.

Our tasting notes
This is a rich, full bodied whisky. Lots of oak, polished wood, pencil shavings on the nose, alongside sweet spices such as cinnamon, ginger and vanilla. Also some toasted nuts and caramelised sugar. By no means what you’d call a sherry monster but this is definitely oak driven. The palate is very rich, sweet and spicy. There’s lots of dried fruit; sultanas, raisins, dried apricots mingled together with a fresher orange/tangerine note. There’s also sweeter honey and vanilla notes and a little dryness lent to the palate by some oaky tannins. The finish is long and presents a distinct hint of peat smoke and tannins backed up by vanilla. With water the whole thing gets a little sweeter with more vanilla, honey and green apples on the nose alongside a little bit of wood smoke. The palate is a little more rounded and softer with less drying spice and a sweeter fruit and nut chocolate bar like profile.

What’s the vedict?
This is an excellent whisky. If you ever get the chance to try this then do, as I said, this is super rare stuff (unless you find yourself in Japan). It’s scarcity and quality is unfortunately reflected in the price, it’s pretty expensive; Y2500 (around £200) a bottle.

I'm no expert but as I sit here sipping on the royal household In a Japanese bar, lagavulin 16 reigns present in my mind.

Just received a bottle as a gift