Within Inbox we aim to write a few lines detailing each press release/piece of news/PR event that we have received and provide links, where possible, for you to find out further information.  This week's edition features the first mention of Christmas ... the countdown has truly begun!

Ballantine's - Festive packaging launched
The best selling blended whisky range of Ballantine's have announced the release of special limited packaging for two of its expressions for Christmas 2012.  The Finest and the 12 years old have received a makeover.  The 12 years old will feature in a gift tin (pictured, left), while the Finest will also appear in two different presentations - a gift tin plus a stylish gift carrying case which is aimed at a younger audience.  The packs will be available in 40 global markets from early December.

Bowmore - 1957 auction update
A few weeks ago, we announced the forthcoming release and auction of the Bowmore 1957 - the oldest bottle of whisky ever released from the distillery or from any of the island of Islay. There are only 12 bottles of this 54 years old whisky for sale. Bottles No.1 and No.2 were to be auctioned - one in Edinburgh last Wednesday (10 October) and one in New York on 28 October - with all the proceeds going to selected Scottish charities. The minimum reserve price is £100,000 (or $155,000) each.

The news coming out of Morrison Bowmore, the distillery's owners, is that the reserve price was not met at the Edinburgh auction.  Despite being close, it was felt that they could not accept less than the reserve price especially as they have committed the proceeds to charitable causes.  Therefore, the auction remains open for another week for any further bids.  The New York auction will proceed as planned, with a similar strategy planned should the same scenario occur there.


Drambuie - New TV ad released
The popular whisky based liqueur have released their latest TV advert as the industry gears up for the Christmas trading period.  The advert is the latest in a series called A Taste of the Extraordinary, which was launched last year, and sees Drambuie again targeting the '25-44 year old professional worker'. The campaign, named The Extraordinary Bar, pulls on historical artistic influences and uses surreal black and white imagery to compliment the rich, golden colour of the Drambuie bottle. 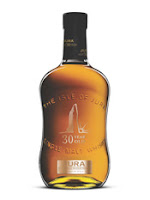 Jura - New 30 years old expression released
The distillery from the isle of Jura have announced the release of a new 30 years old to their range. The whisky named The Standing Stone, or Camas an Staca in Gaelic, takes its name from the largest of Jura's eight standing stones - a 12 foot high obelisk which was reputedly laid 3,000 years ago by the earliest inhabitants of the island.  The Jura 30 years old Camus an Staca will be available across the world from December at a price of £350.

The Jura distillery manager Willie Cochrane says, “The standing stones have stood the test of time on the island, so it’s only fitting that we create an aged whisky in their honour. The whisky’s long maturation in American white oak gives the spirit a quiet serenity, whilst its three years spent in the finest Oloroso Sherry butts from Gonzalez Byass gives this spirit a commanding finish.”


posted by Whisky For Everyone at 6:09 AM