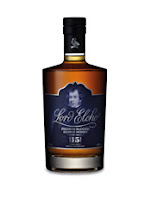 The Lord Elcho 15 years old is a new release by independent spirits company Wemyss Malts. It is the company’s first foray into the world of premium blended whisky and compliments their range of single cask malt whiskies and award winning blends. The whisky is named after Lord Elcho, the eldest son of the 5th Earl of Wemyss, who was a supporter of Bonnie Prince Charlie in the 1700s. He went into the Battle of Culloden at the legendary Prince’s side and following their catastrophic defeat he was stripped of title and land, before being exiled to France.

Wemyss Malts is a Scottish based company which specialises in hand crafted whiskies. It forms part of the larger Wemyss brand, which includes Darnley's View gin and two wine brands - Fonty's Pool from Western Australia and Rimauresq from Provence, France. All are owned by the Wemyss family (pronounced weems), whose base is Wemyss Castle which overlooks the Firth of Forth estuary in Fife.  The castle has been the family home since 1421 when it was constructed by Sir John Wemyss. The Wemyss family have traditional ties to the whisky industry and these remain, as barley grown on their estate is still used by leading distillery companies.

The Lord Elcho is a blend of some of the finest single malt and single grain whiskies in the Wemyss collection, and there is a heavy emphasis on ex-sherry cask matured whisky. As with all blended whisky, the age statement indicates the minimum age of whisky used in the final product. Here, that minimum age is 15 years. It has been bottled at 40% ABV and has will cost £49.50 ($80 USD) a bottle. It is available from specialist whisky retailers in selected Asian and European markets, and via www.wemyssmalts.com. There is also a new dedicated website for the brand – check it out at www.lordelcho.com.

Our tasting notes
The colour is dark amber and the nose has an instant richness and sweetness to it. There are plenty of rich dried fruit aromas (think of raisins and sultanas) and warm butterscotch. These aromas are backed up by some tangy candied orange peel and soft bittersweet cereal grains, plus a late hint of baking spice (imagine cinnamon, nutmeg and five spice).

On the palate, this feels soft and rich with plenty of sugary sweetness (think of crumbly brown sugar) and some immediate tangy orange peel. As the tangy orange note fades, the sweetness changes to become more like the butterscotch from the nose. There is also a good dose of runny honey and a hint of vanilla. The dried fruits (especially the sultanas) are never far away and become more prominent with time, as does some lovely warm wood spice (imagine cinnamon again, with a hint of clove). There are late distant notes of milk chocolate and creamy, slightly bitter cereals.  It coats the mouth and feels luscious and decadent.

The wood spice and bittersweet cereals lead you through the finish, which is of decent length. These elements make the finish slightly drier than expected, especially once the delicious rich honeyed sweetness has begun to fade. The returning note of candied orange finishes things off and it is this, plus the lovely cereal note, that last the longest.

What’s the verdict?
The Lord Elcho is a great first foray into the world of premium blended whiskies by Wemyss Malts.  It is a delicious and high quality whisky that oozes class.  The depth and complexity that has been created in the blend makes this whisky perfect for sipping and savouring.  It will be very interesting to see how Wemyss follow this up and look forward to trying any subsequent releases.