Within Inbox we aim to write a few lines detailing each press release/piece of news/PR event that we have received and provide links, where possible, for you to find out further information.  This week's Inbox is a bumper edition, so let's get cracking with the news ... 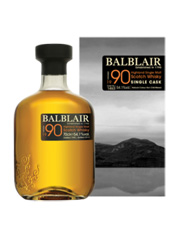 Balblair - Exclusive Vintage released
The up-and-coming north Highland distillery of Balblair have announced a new single malt to join their Vintage range ... but with a couple of twists.  The first twist is that is is exclusive to members of their recently formed members club, named The Gathering Place.  This is free to join via www.balblair.com and includes various benefits, which are listed on the site.  One such benefit is to be a series of exclusive single malt bottlings, such as this first one.

The second twist is the single cask which has been selected by distillery manager John MacDonald for the release.  It is an ex-bourbon American oak cask (Cask #1463) which has been previously used to mature a smoky Islay whisky.  This is something which Balblair rarely do, so it almost unique as a product.  The whisky was distilled in 1990 and bottled this year - it is retailing for £90 per bottle on a first come first served basis to The Gathering Place members.  Restrictions include only one bottle per member and bottles can only be posted to a UK address.  To buy your bottle and to read tasting notes - click here.

Chivas Brothers, the Scotch whisky arm of Pernod Ricard, has announced its intention to build a new malt whisky distillery in the Speyside region. The company is currently consulting the local community and planners regarding a location near the River Spey at Carron - this will occupy the site of the old Imperial distillery, which has been dormant since 1998. The new distillery would supply malt whisky for the Chivas Brothers portfolio of blended whiskies, which includes Ballantine's and Chivas Regal, and will benefit from the latest innovation and environmental expertise, such as heat recovery technology and modern construction techniques.

This announcement comes on top of others from earlier in the year, where Chivas Brothers announced its plans to grow its malt whisky distillation capacity by +25% by April 2013 with the re-opening of the Glen Keith distillery and expansions at four of its existing Speyside distilleries. It has also increased the capacity of The Glenlivet Distillery by 75% in 2010. 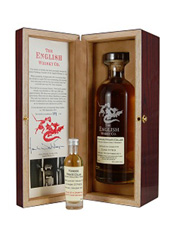 English Whisky Co - Three limited bottlings
The Norfolk based English Whisky Company have announced the release of three very limited edition single malts.  The three whiskies come under the name of Founder's Private Cellar Single Cask Collection and have been specially selected by James Nelstrop - the company's founder.  These have come from his own private collection of exceptional casks that were distilled around the time that their St. George's distillery was opened in late 2006.

The three whiskies are a triple distilled expression, an ex-Port cask and a peated expression from an ex-Sauternes dessert wine cask.  All are at their natural cask strengths and all are priced at £125 a bottle.  There are only 95 bottles available of the Triple Distilled and Port Cask expressions, and only 250 of the Peated Sauternes.  They can only be purchased via the shop on www.englishwhisky.co.uk - here there is a page for each of the three whiskies including some tasting notes. 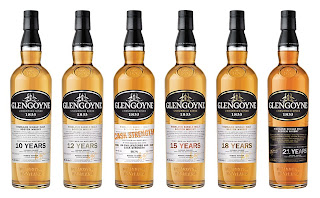 Ian Macleod Distillers, the owners of the Glengoyne distillery, have unveiled a new core range of single malts and new packaging. In addition to the current 10, 12 and 21 year old expressions, Glengoyne have introduced three new malts to complete the line-up - 15 year old, a cask strength expression (which replaces the current 12 year old cask strength) and an 18 year old to replace the current 17 years old. Each new expression uses some of the finest sherry casks available within Glengoyne’s warehouses.

The new range has been repackaged by Glasgow based agency Good Creative and focuses on the brand’s strengths and history with a strapline ‘Worth the Wait’ - this reinforces the link between handcrafted expertise, taste and unique distillation process. The launch will be supported by a new website and advertising campaign and the new range will be available from selected supermarkets and specialist whisky retailers from early November 2012 in the UK. Recommended prices for the new additions are £46.99 for the Cask Strength, £47.99 for the 15 years old and £74.99 for the 18 years old. For more information, please visit www.glengoyne.com. 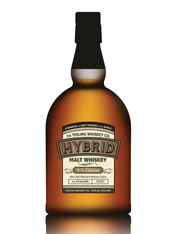 Teeling Whiskey Co - Hybrid whiskey launched
The name of Teeling has re-emerged in to the whiskey landscape with the announcement of an innovative new whiskey. The newly formed Teeling Whiskey Company, which has been founded by Jack Teeling following the sale of his Irish whiskey distillery of Cooley to Beam Global earlier this year.  His new company plans to continue the work of bringing back independent and heritage brands, and broaden consumer choice in the Irish whiskey sector with handcrafted products.

The Hybrid Malt Whiskey Edition No.1 has been constructed using award winning single malt whiskey from the Cooley Distillery in Ireland and 10 years old single malt whisky from the Islay distillery of Bruichladdich in Scotland - this has been married together in oak casks for a further eight years. It is one of the first whiskies to mix Scottish and Irish malts to be commercially available.  The Hybrid is bottled at the natural cask strength of 44.1% ABV, is non chill-filtered and of natural colour.  The Edition No.1 will be limited to just 1,200 bottles and will be available from specialist whisky retailers shortly for a recommended price of £30.

The Hybrid No.1 sounds like a new version of Celtic Nations.