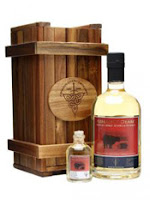 The Abhainn Dearg distillery is located on the Scottish isle of Lewis, the most westerly and largest of the islands in the Outer Hebrides.  It was founded in 2008 by islander Mark Tayburn and was built on the remote far western coast of Lewis, close to the tiny hamlet of Uig, in a converted derelict fish farm. The proviso was to produce hand crafted spirit in a traditional way.  Abhainn Dearg (pronounced aveen-jarrek) is translated as 'red river' from the local Scottish Gaelic dialect and refers to the colour of a local river.  It is the first ever legal distillery in the Outer Hebrides.

The annual production of Abhainn Dearg is approximately 20,000 litres and it released its first product in 2010, which was named Spirit of Lewis, which was a young partially aged spirit based on an ancient 400 year old recipe.  The first single malt was released a year later in 2011.  The whisky is rare and only 2,011 bottles were released.  It is bottled at three years of age and at an alcoholic strength of 46% ABV, and is non chill-filtered with natural cask colouration.  Each bottle is bottled by hand at the distillery.  There are still some bottles left and it can be purchased via the Abhainn Dearg website - a bottle will cost £150.

Our tasting notes
The colour is a very pale lemon yellow and it is one of the most lightly coloured whiskies that we have ever tried.  The nose is surprisingly pungent and this is driven by robust aromas of malty cereals, burnt biscuits and dried grass/hay.  Underneath are notes of green fruit (think of pear and apple), vanilla, honey and toffee, however these take plenty of time to develop in the glass. A late hit of lemon zest can also be detected.

On the palate, this feels warming and viscous.  It again has similar robust initial flavours as experienced on the nose, especially the heavy malted cereals and slightly burnt biscuits.  As these fade, fresher notes of green apple and tangy lemon zest develop.  The lemon in particular becomes distinctly mouthwatering and pleasantly sharp.  Some much needed sweetness is introduced with increasing notes of vanilla and toffee, along with some delicate wood spices (think of cinnamon especially).  Finally the dried grassy note from the nose appears and gives a drying vegetal note that continues in to the finish.

The finish is again full on and shows those gripping bittersweet malted barley and biscuity notes.  The dried grass/hay is never far away and there is also some delicate wood spice which adds to the mouth watering dryness.  The overall feeling is that of dryness, although hints of the green fruit and an icing sugar-like sweetness do fleetingly appear.

What's the verdict?
As with any new distillery, it is always interesting to sample their products and try to gauge the potential.  This seems different from most other similar three year old products that are on the market, be it from Scotland or further afield, as the spirit seems much heavier and more robust than most others. It will be very interesting to see how this develops with extra maturation.

One huge minus point about this whisky is the price, which has seen the product given a hefty £150 tag.  We know that this is a new product and is from somewhere with a small and hand made production, but it is surely priced too highly - that is probably why there is still some left for sale ...  It probably should be at least half the price - for example like recent similar products such as Glenglassaugh Evolution (£50) and Kilchoman Machir Bay (£40).  However there are some 5cl miniatures floating around, which is how we picked up our sample.  One of these is worth searching out for about £6.

Glad you mentioned Kilchoman. for me, THE best young distillery at the moment,with absolutely brilliant whsikies at really decent prices.
I bought a bottle of Abhainn Dearg, no. 768, on release. I am pleased to read your tasting notes, I had feared a worse outcome. It would seem that they too know what they are about. It is a thin line for small distilleries though, go for the unique, small production at exclusive prices, or, like Kilchoman, go for unique, small production ataffordable prices. It will be interesting to see which survives. I do hope both make it. They keep the old, original whisky making traditions alive. A small counter to globalisation.