Last weekend was significant for two reasons - firstly, just when we thought that Spring had sprung, the weather came out fighting and gave London a bone chilling snowy blast from Siberia.  Secondly, the globe trotting Whisky Live show rolled in to town.  This year the event was once again held in The Honourable Artillery Company, close to the City of London. The impressive building is a historic 18th Century mansion set in six acres of garden.

Whisky Live is an event that showcases the world of whisky to the general public. The phenomena has now spread around the world and annual shows are now held in locations such as North America, China, India, Australia, New Zealand, South Africa, Taiwan and across mainland Europe. Whisky Live has two events in the UK - one in London and the other in Glasgow. They are the biggest whisky shows in the UK, although many more have popped up since it was first held 13 years ago.

As with previous years, a number of the exhibitors used the show as a platform to show new products. We were lucky enough to try a good range of these and thought we'd share a few of our favourites in this 'highlights package'. 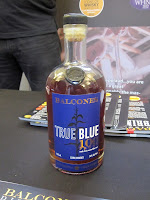 Balcones True Blue 100 Proof
One of the biggest highlights of the show was getting to meet and have a brief chat with the charismatic Chip Tate, the Master Distiller and the brains behind the Balcones distillery in Texas.  What a nice chap he was too!  It was even more interesting given that we had just reviewed some of the Balcones range earlier in the week - click here to read that. The True Blue 100 Proof is a cask strength version of the Baby Blue corn whisky from their range and it has a delicious creamy, nutty feel with plenty of gripping oaky wood spice. 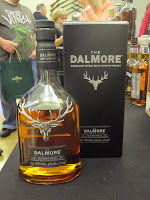 Dalmore Millenium Edition
This is a limited edition of the north Highland single malt that has been constructed using a small selection of casks that were filled at one minute past midnight on New Year's Day 2000. It is bottled at the natural cask strength of 57.7% ABV and is only available to Dalmore Custodians (their online members club).  It is also one of the nicest Dalmores that we have sampled for a while with plenty of lovely rich, sweet caramel notes, dried fruit, spiced oranges and a decent amount of wood spice. 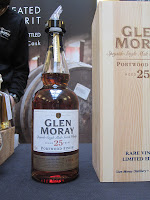 Glen Moray 25 years old Port Wood Finish
The under rated Speyside distillery has a habit of releasing some exceptionally good wine cask finished single malts, so we were looking forward to trying this one.  This new expression has not even been released yet and we were informed that it was the first ever bottle to be opened for general sampling.  Even better was the fact that we got the first two samples. It offered a fantastic mix of caramel, red berries, dark dried fruits, cinnamon bark, a hint of treacle and some wonderful drying spices on the finish. 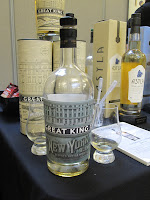 Great King St New York Edition by Compass Box
The New York Edition is a limited version of the award winning Great King Street blend by the innovative guys at Compass Box.  This was first released last year and then only to a restricted market in America.  The main difference with this and the regular GKS is that it has a smoky element to it.  There is a good combination of vanilla, honey, sweet cereals and earthy, mossy peat smoke.  It will be interesting to see if there are any further special editions in the series. We'll stick to the regular GKS in the meantime ... 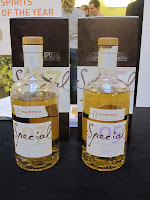 Mackmyra Special 05 & 07
The Swedish distillery of Mackmyra seems to be gaining plenty of momentum right now and this is reflected by a noticeable jump in quality in their whiskies.  This is shown in two lovely single malts that we tried at the show.  The Special 05 is part matured in ex-lingonberry wine casks and has a wonderful floral aroma and sweet sugary taste.  The Special 07 is part matured in ex-cloudberry wine casks and has notes of red fruit, toffee and cinnamon-like spice, with a hint of warming earthy smoke. 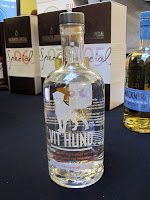 Mackmyra Vit Hund
One of the big crazes in the whisky industry currently seems to be the releasing of new make spirit. The latest one is Vit Hund (that's 'white dog' when translated from Swedish) by Mackmyra.  It is currently only available in Sweden.  The Vit Hund had been reduced down to 40% ABV and showed the characteristic new make aromas of fresh green apple and pear.  However it also had a surprisingly expressive malty cereal note (especially on the nose), which gave it a bittersweet, robust and creamy quality. 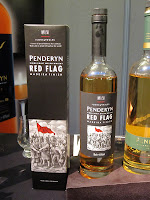 Penderyn Red Flag
This whisky is the first in a series named Icons of Wales. There are 50 different limited edition releases planned for this series over the next 10-15 years or so.  The Red Flag is a version of Penderyn's popular Madeira cask finished single malt and is bottled at 41% ABV.  The whisky has a lovely immediate sweetness (think of honey, vanilla and sugary dried sultanas) and this mingles with further notes of juicy peach, malty cereals and a pinch of nutmeg on the palate.  Delicious and fresh. 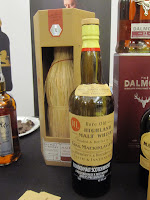 Shackleton's Whisky - Second Edition
The second coming of the award winning Shackleton whisky has plenty of hype around it, much as the first edition from a couple of years ago did.  The bottle is very similar to the first edition, but the packaging has changed.  The recipe of whiskies included is also as near to the original as possible.  From our memory of the first edition (which we loved), it certainly smells and tastes quite similar.  There are plenty of vanilla, honey and cereal notes with a detectable pleasant whiff of ashy smoke.  Very nice indeed. 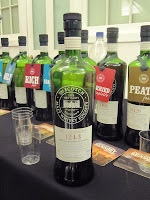 SMWS 124.3
Recently we have sampled some lovely whiskies from The Scotch Malt Whisky Society.  All their whiskies are bottled at cask strength from a single cask and one recent addition to the range has been Distillery #124.  This is Miyagikyo from Japan and named All The Complexities of Summer.  Boy, it's a stunner - there is a wonderful mix of rich honey, vanilla, malted barley, wood spice and floral notes.  The palate is dripping in honey and green fruit and the warming spices are particularly prominent on the finish. 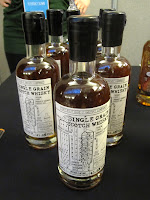 That Boutique-y Whisky Company Invergordon
Another trend in the whisky industry currently seems to be the increasing number of single grain whiskies that are appearing on the market.  One of the latest is part of the Master of Malt range of That Boutique-y Whisky Company bottlings.  It is from the Invergordon grain distillery in the north Highlands and features a cool sketch of a column still on the label.  The whisky is rich and nutty with plenty of vanilla and coconut present, all backed up by warming and drying wood spices that grip the taste buds.

posted by Whisky For Everyone at 9:32 PM

I have to say that Whisky Live this year was disappointing.
Less distilleries than previous year and less variety.
The worst part have to listen to Dick Patterson during the dinner.

After the past 2 years of being crammed into that tiny hall we (our whisky drinking group) decided to give this years Whisky Live a miss in favour of the later Whisky Exchange show in October. Sounds as if that was a wise move.