The topic of adding water to your whisky, or whether you should at all, has always been a hot topic amongst whisky consumers and ones that generates plenty of discussion.  Recently this seems to have been taken to a new level with the release of products such as the Uisge Source Water range - this currently has three waters from three different regions of Scotland, with the idea being that the best water to add to a particular whisky is that from the same region.  Now the first major single malt brand has stepped in with a new innovative scheme that looks at the science behind adding water to whisky ...

The Bowmore Water Program is an educational scheme designed to explain what happens to your whisky, specifically Bowmore whisky, when water is added.  It is aimed at both those in the trade and consumers with the intent of dispelling some of the misconceptions, myths and untruths about the addition of water. The program has been jointly devised by Rachel Barrie, the Master Blender for Morrison Bowmore Distillers, and Cara Laing, the Bowmore Marketing Manager. 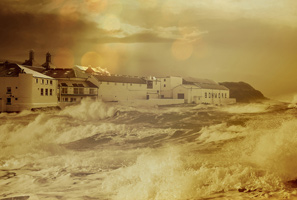 The Bowmore distillery is located on the famous whisky making island of Islay, which lies off the west coast of Scotland. It is the oldest distillery on the island and one of the oldest in all of Scotland, having been founded in 1779 by John Simpson. Bowmore is currently owned by Morrison Bowmore who have been in control since 1963. They are a subsidiary of the larger Suntory drinks company from Japan who acquired Morrison Bowmore in 1989. The annual production of the distillery is two million litres and the core range is extensive, making Bowmore one of the biggest selling single malts in the smoky/peaty style. 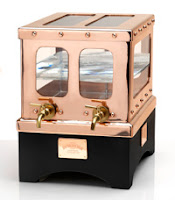 The program is being rolled out in three of Bowmore's biggest markets this Spring - Asia, North America and the UK - and will see selected key accounts receive staff training, tailored tasting events, one of two bespoke water dispensers (modeled on the spirit safe at Bowmore distillery - pictured, left) and the Bowmore Water & Whisky Guide which describes in layman's terms about the science and chemical reactions that take place when water is added to whisky.


So what are these changes?  Rachel Barrie, who has a chemistry background, including a stint as a research scientist at the Scotch Whisky Research Institute, has documented the following visual and sensory changes that can be observed when water is added to whisky.


Hats off to Bowmore for this iniative.  We have long held the belief that people can (and should) drink whisky however they like, despite other brands telling you to the contrary.  It is your right if you have spent money to purchase a bottle.  The addition of water has so many stigmas and misconceptions attached to it, but most Master Distillers and Master Blenders that we have met swear by it for the very reasons above.  Simply put, it allows them to analyse their whiskies more accurately.  It is naturally personal choice but if it's good enough for them, then it's good enough for us.  The scientific aspect adds a new dimension to the debate.

Why not try adding some water to a whisky and see which ones of the above you can find, then compare it with the neat version of the whisky?  You never know what you may discover ...

posted by Whisky For Everyone at 12:06 PM