Welcome to this week's Inbox - is it really March already?  For those that have recently discovered us, Inbox is our weekly round up of whisky news and PR material that has found its way in to our email inbox. It was created as we cannot write full articles or do justice to every piece received. It features items from around the world of whisky and is published by us each Friday.

Chivas - More Drifting
A few weeks ago in Inbox we spoke about the first part of Drifting, a film that was a collaboration between the Chivas whisky brand and Mexican arthouse film makers Canana. To see this first part directed by Diego Luna - click here.  Now the second part of the 'adventure' has been released, this time directed by Gael Garcia Bernal.  This carries on from the first part and again plays on the concept of friendship and sharing, which the brand is trying to portray. 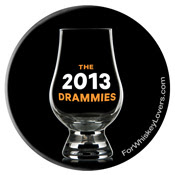 Drammie Awards - Nominations announced
A couple of weeks ago, we reported on the call for nominations for this year's Drammie Awards - a whisky award that allows the general whisky fan and consumer to nominate and vote for their best (and worst) whiskies and whisky related topics over the previous year.  All of the nominations have now been collated by the organisers For Whiskey Lovers, and they are asking people to vote for their favourites from the finalists list.

This can be done by visiting the special page on their website - to do this click here.  Their are 15 categories that you can vote in, with five selections to choose from in each category, and you have up until Friday 15 March. The winner of each category will be announced on Monday 1 April.  We are delighted to have been selected as one of the finalists in the 'Best Whisky Information Source' category - this is the first thing that we have ever been nominated for and we are up against some stiff competition in there, but we will see how we do!

Glenmorangie - Calling all golf fanatics
Glenmorangie, the famous single malt brand from the north Highlands and the official spirit of the Open Golf Championship, has announced a new competition that invites golfers and whisky fans to vote for the top golf courses in the world. The competition was announced earlier this week at the iconic St. Andrews golf course in Scotland and will run throughout 2013. Golf fanatics can go to www.glenmorangie.com/golf to vote for the courses they consider the best.

The entries will be judged and commented on by a distinguished panel including legendary players Tony Jacklin and Sir Nick Faldo, plus renowned golf course architect Robert Trent Jones Jnr and leading golf photographer David Cannon. As well as uploading their own nominations, fans will be able to comment on other nominations, interact with the panel and vote for their top 18 courses. A series of tempting monthly prizes will also be on offer, including a trip to the 2014 Open Championship at Royal Hoylake. 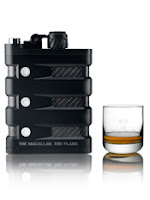 Macallan - The Flask appears
The popular Speyside single malt of Macallan have announced their latest collaboration, this time with sport and lifestyle brand Oakley Inc.  They have worked on a project together to design the ultimate hipflask for carrying whisky.  The result is simply entitled The Flask and is pictured left.  It supports the brand's recent drive to support quality and innovation in design.  The Flask is made from stainless steel and carbon fibre for durability.

The Flask can hold 20cl of liquid and is extremely robust in functionality with every potential circumstance and environment of usage considered. The inner flask is laser welded, wrapped in carbon fibre composite and clad in special aluminium used in the aerospace industry. The Flask is extremely limited edition with just 100 units available and will be available to purchase via www.themacallan.com. The price is £600.

posted by Whisky For Everyone at 6:27 AM