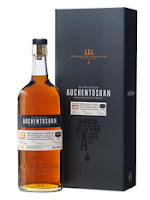 This new whisky is the latest in Auchentoshan's vintage series from the 1970s.  Other expressions in the series include the 1975 Bourbon Cask and 1977 Sherry Cask, which we have previously reviewed. Auchentoshan is unique amongst Scottish whisky distilleries as they triple distil every drop of their spirit using three stills. Elsewhere in Scotland the common practice is to distil twice, whereas triple distillation is more commonly associated with Irish whiskies.

Auchentoshan (pronounced ock-en-tosh-an) is the nearest distillery to Glasgow - it is located in the Lowlands region and sits to the north west of the city near Clydebank. It was officially founded in 1823, although records shown a distillery called Duntocher operating very nearby in the early 1800s. Auchentoshan translates as ‘corner of the field’ from the local form of Gaelic and was severely damaged during World War II, when it was virtually destroyed during a German bombing raid.  One bomb crater is now the pond from which they take water to re-condense their spirit.

Auchentoshan is currently owned by Morrison Bowmore, which is a subsidiary of the Japanese company Suntory. It has a current production of 1.75 million litres per year.  Their triple distillation produces a new make spirit that is lighter and more delicate in flavour and higher in alcohol.  In fact, Auchentoshan has the highest strength of any new make in Scotland at 81.5% ABV.

The 1970s are regarded as having produced some of the best remaining casks of old Auchentoshan and this new 1979 Vintage was distilled in October 1979.  It has been maturing in first fill ex-Oloroso sherry butts ever since and after 32 years it has been bottled at the natural cask strength of 50.5% ABV.  There are just 1,000 bottles and each bottle is numbered.  The whisky was released last December and is presented in a premium black cardboard box with copper trim.  It will cost £350-375 from specialist retailers.

Our tasting notes
The colour is a deep orange brown and the nose is highly aromatic.  Immediately there are some rich dark dried fruits (think of raisins, sultanas, prunes and candied orange peel) and these are quickly joined by notes of caramel, toffee and toasted almonds.  There are also hints of bitter dark chocolate, some dried mango and a whiff of old cigar box and menthol.  Further aromas of cinnamon and baking spices make you want to take a sip.

On the palate this feels rich, thick and viscous.  There is an immediate tangy note of orange (think of marmalade) and it then becomes very fruity with plenty of notes of raisins, plums, prunes and dried red berries present.  The nutty element from the nose is also present and is again reminiscent of toasted (or possibly caramelised) almonds and hazelnuts.  The chocolate note is stronger than on the nose, as is the wood spice which comes through particularly towards the finish - again think of cinnamon and baking all spice, with a pinch of nutmeg.  Final hints of menthol, liquorice and maraschino cherries add to the depth and complexity.  The combination of the above is like the biggest, best alcoholic fruit cake that you could ever wish for.

After that, the finish is slightly disappointing - it is long, warming and full of wood spice and caramel notes.  There is a lovely dried fruity quality, which fades to leave the drying wood spices and a hint of bitter chocolate and menthol.

Upon adding some water, the whisky seems to become woodier and earthier.  The orange note really jumps out both on the nose and the palate.  The whisky feels naturally softer and mellower at all stages, and the chocolate and menthol both come through more.  This is especially true on the palate.

What's the verdict?
This is a delicious and highly expressive whisky.  This vintage series from Auchentoshan, which is an under rated distillery in our opinion, has seen some great whiskies released.  The quality of the ex-Oloroso sherry casks shines through in this release and has produced a single malt of incredible depth and complexity.  It may be too rich in flavour for some, but it is worth trying if you can as it demonstrates 1) how good old whiskies can be, 2) how good old sherry cask matured whiskies can be and 3) how good Auchentoshan whisky can be.