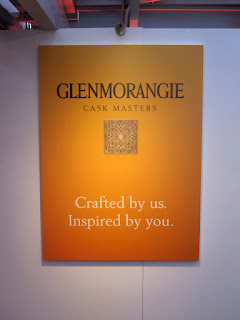 Last week, we were delighted to have been invited to the world launch of the Glenmorangie Cask Masters - an innovative new online initiative designed to engage worldwide fans and consumers of the famous north Highland single malt.  The event was held in the impressive surroundings of The Deck, a room at the top of the National Theatre which provided panoramic views of London's iconic skyline, the South Bank and the River Thames.  The Cask Masters gives consumers the chance to select which Glenmorangie whisky they would most like to be bottled and then follow the whisky through four further stages, until its launch in late 2014.

The Glenmorangie distillery was founded in 1843 when William Matheson applied for a license for a small farm on the current site. The original name was Morangie and it is located on the edge of Tain, a small town which is roughly about an hour north of Inverness. It took the current name in 1887 and is now one of Scotland's largest single malt distilleries with an annual production capacity of six million litres. The copper pot stills, which are replicas of originals purchased second hand from a gin distillery in London during the 1840s, are the tallest of their type in Scotland and stand over five metres (16.5 feet) tall.

The Glenmorangie Cask Masters launch was co-hosted by David White, Marketing and Communications Director for Glenmorangie, and Dr. Bill Lumsden, Head of Whisky Creation for Glenmorangie (pictured above on the far left addressing the assembled guests).  The Cask Masters is an online campaign that is split in to five stages and will run over the next year and a half.  The initial stage is to select one of three whiskies and this part of the process runs until the end of July this year.

Once you have signed up and selected the whisky that you would like to see in a bottle, you can then take part in the further four stages of the process - these include choosing a name for the new product, deciding the direction that the new packaging will take, selecting the photographic style of the promotional campaign and locating where the world launch of the new product should be.  Who better to describe the different stages of the Cask Masters than Dr. Bill Lumsden himself?


The three whiskies in the Cask Masters process have been personally selected by Dr. Lumsden and when speaking to him briefly at the event, he said that his main goal was to try to select the three best whiskies that accentuated Glenmorangie's popular 'house style'.  The three whiskies are also still maturing in casks and are all between 15 and 18 years of age, so he has had to use his experience to predict how they will continue to mature and be 'ready' by the time of bottling in 18 months time.

We were very lucky to get to taste the three selected samples at the launch event and our tasting notes are below.  All have been prepared to 46% ABV.  The good news is that you too can taste the whiskies as Glenmorangie are taking samples out to every consumer show that they are attending in the coming months.  So, what are the details of each whisky and how do they taste?

Cask A - Grand Cru Burgundy
This whisky has spent roughly 10 years in ex-bourbon casks, followed by almost five years in ex-Burgundy French oak red wine casks.  The colour is golden amber with a dark russet hue. The nose is initially quite closed but opens up nicely to reveal plenty of red berry and toasted nut notes.  There is a savoury and slightly earthy quality to it also (Dr. Lumsden said mushrooms here), and this is complimented by some warming wood spices, vanilla and a hint of cocoa powder.  The finish is dry and very pleasant.

Cask B - Grand Cru Bordeaux
This whisky has followed a similar path to Cask A, but has been placed in toasted ex-Bordeaux French oak casks after maturation in ex-bourbon casks.  It is slightly older though and has a deep amber colour with a highly perfumed nose.  The aromas and flavours present include dark dried red fruits (think of prunes and cranberry) mixed with citrus zest (both lemon and particularly orange) and plenty of expressive, drying wood spices.  With water, this comes to life even more and a lovely toffee-like note comes out.

Cask C - Manzanilla
This whisky has again spent some time in ex-bourbon casks before being transferred into ex-Manzanilla sherry casks, which are rarely used in the whisky industry for maturation.  This has produced a bold, intense whisky which is golden yellow in colour.  It shows a wonderful mix of aromas and flavours - brown sugar, honey, vanilla, sultanas, candied lemon, cinnamon bark and a lovely slightly salty brine-like tang which adds depth and exaggerates the existing characteristics.

To join the fun of the Glenmorangie Cask Masters and to follow the progress of whiskies and the selection process over the next 18 months, simply click below and register. Which whisky will you choose? Cask A, B or C?

There are prizes, including a VIP trip to the distillery, available to participants throughout the process.  Glenmorangie have also just launched their official Twitter and YouTube accounts - you can follow them @TheGlenmorangie or via www.youtube.com/user/glenmorangie.

To view some photos that we took during the launch event, visit our Facebook photo album by clicking here.

posted by Whisky For Everyone at 8:11 PM

We were there too. Loved it. We're going with Cask C. Powerful!