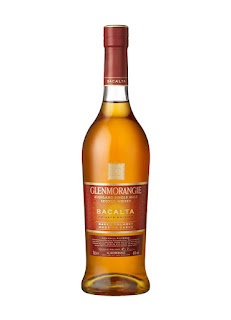 The Bacalta is a new limited edition single malt whisky from the famous north Highland distillery of Glenmorangie.  It is the eighth release in their award-winning annual Private Edition range.  As with the previous editions this whisky is the brainchild of Dr. Bill Lumsden - the Director of Distilling, Whisky Creation & Whisky Stocks at Glenmorangie.  Bacalta translates as 'baked' from Gaelic and refers to the ex-Malmsey Madeira wine casks used to finish this whisky.  These were filled with wine and left to mature and bake in the sun on the island of Madeira.  They were then emptied and transferred to Scotland to be filled with part-matured Glenmorangie whisky to create Bacalta.

Glenmorangie is one of the biggest selling single malt Scotch whisky brands in the world and was founded in 1843 by William Matheson. It was originally named as Morangie and took its current name in 1887. Glenmorangie is one of Scotland's larger single malt distilleries with an annual production capacity of six million litres. The copper pot stills are the tallest of their type in Scotland and stand over five metres (16.5 feet) tall. The distillery and brand are currently owned by Moet Hennessey, who purchased them in 2004.

“For years I had longed to create the best Madeira-finished whisky possible. Realising that ambition took time and dedication, as every step of extra-maturation was tailored exactly to our specifications. Glenmorangie Bacalta is a burst of sunshine in a glass.”
Dr. Bill Lumsden.


Glenmorangie Bacalta is bottled at 46% ABV and is a limited edition, although the exact number of bottles has not been revealed.  It is non chill-filtered and is available through specialist whisky retailers now.  The recommended retail price is £79 each.

Our tasting notes
The colour is deep golden yellow with a tint of amber and the nose is predominantly made up of sweet, fruity and floral aromas.  Initial aromas are of sultanas and dried apricots, along with some milk chocolate and candied citrus (especially orange and a hint of lemon).  Underneath are further aromas of toffee, bitter almond and a whiff of coffee.

On the palate this is velvety and viscous with plenty of initial sweet and fruity notes.  Most prominent are those of juicy sultanas, bitter candied orange (or is it marmalade?) and butterscotch.  This note in particular becomes more savoury and reminiscent of burnt caramel or toffee with time.  The sweetness continues in the form of honey, golden syrup, raisins and some lovely bittersweet malty cereals.  There are also increasingly influential toasted wood spices present - think of cinnamon, bitter almond and all-spice especially.  Hints of treacle and menthol round the palate off.

The sweetness fades slowly as the finish progresses.  The tangy orange note is now at the forefront, as is that of burnt caramel and bittersweet malt.  These eventually fade too leaving the drying, warming toasted wood spices to linger.

With water, the floral aromas from the nose become more evident and have a hint of honeysuckle or something similar.  The whisky loses its spiciness and becomes incredibly soft, creamy and fudge-like.

What's the verdict?
The Bacalta is a delicious whisky that combines sweetness, fruitiness and spiciness with a wonderful viscosity and lengthy finish. We are big fans of Glenmorangie and their annual Private Edition range ever since we first purchased a bottle of the early Sonnalta release.  Bacalta is one of the best recent bottlings in the series in our opinion.  The pricing has also remained at the same level of previous years and this makes it increasingly decent value.

Dr. Lumsden hinted at the launch of Bacalata about taking the series in a very different direction for next year's release, which sounds exciting.  However, we now have a long wait to find out what that may involve ...

posted by Whisky For Everyone at 8:06 PM

Finally found a bottle, and I agree with your tasting notes completely. Wonderful dram and a fair value. Thanks for the review!

I absolutely love the complexity in this scotch, Glenmorangie has done it again by bringing one of the best malts from the highlands to market.

Wow.... What a article belonging to the Whisky Brands .