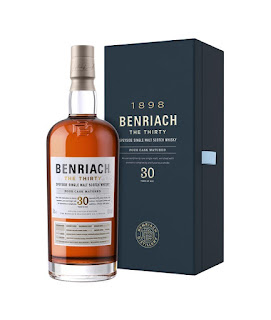 This whisky sits at the pinnacle of the newly revamped core range from the Speyside distillery of Benriach. This range is designed to showcase their eclectic range of casks from around the world (these come from 20 different origins) and the three different spirit styles that are produced there - classic Speyside, peated Speyside (produced for only 5-6 weeks each year) and triple distilled (produced for just 1-2 weeks each year). The range has been entirely created by Dr. Rachel Barrie, the Master Blender for Benriach. The Thirty uses only peated malts, which are very rare at this age, and features four cask types - ex-bourbon, ex-Port wine, ex-sherry and virgin oak.

In addition to The Thirty the range also features two entry level 10 year old expressions - The Original Ten and The Smoky Ten, of which one uses the classic Benriach spirit and the other their peated spirit. There are also two 12 years old bottlings - The Twelve and The Smoky Twelve, again one classic and one peated. Then at this higher end there are age statements released at 21 and 25 years of age. All feature a marriage of at least three cask types, and in some cases four.

The Benriach distillery was founded in 1898 by John Duff and is located just south of Elgin. Following a long period of closure Benriach re-opened in the mid-1960s and became well known for producing high quality single malt to be used in blending. The practice of producing peated malt began in 1972 and has been maintained each year since. This short period is called the 'smoke season'. Triple distillation was first practiced in the late-1990s.

The current owners are Brown-Forman and the annual capacity is just over one million litres. All the whiskies are released in new packaging and further limited editions are due to be announced later this year and early in 2021.

Benriach The Thirty is bottled at 46% ABV and is both non chill-filtered and of natural colour. It will be available worldwide from specialist whisky and luxury retailers. A bottle will cost £650/ $875 US.

The colour is deep golden amber and the nose is full of dusty and woody spices. These are backed up by aromas of vanilla pod, beeswax polish and plenty of dark dried fruits - think of raisin, currants, dates and figs. There are also aromas of walnut and brazil nut along with big fragrant dried tropical fruits such as mango and papaya. A subtle and soft peat smoke, plus citrus oils support everything.

On the palate this whisky initially feels extremely savoury. The soft peat smoke is much more prominent than on the nose and the dusty wood spices are to the fore - imagine cinnamon, clove, all-spice, nutmeg and toasted oak. These are supported by heavy notes of citrus oil - think of orange especially, but with a hint of grapefruit peel - and plenty of hard caramel and honeycomb.

The dried fruit notes, both traditional and tropical, also develop and increase in influence with time. Raisins, currants and mango are the main notes here, plus apricot jam. Underneath is a distinct nutty quality (those walnuts and brazils again, plus a hint of toasted hazelnut), some milk chocolate and cocoa powder. The beeswax polish note drifts in and out, making us think of old antique furniture.

The finish is long and luxurious. Milk chocolate and malted cereal notes are partcularly strong. It is the sweet and fruity notes that fade first and this leaves the savoury characteristics, especially the malt and dusty, woody and ashy notes to linger.

The Thirty is a stunning whisky and a fitting pinnacle to the new range of single malts from Benriach. Rachel Barrie has created a whisky here that tastes and feels older than it is and has skillfully married the four casks together. Peated whiskies from Speyside at this age are extremely rare - to our knowledge only one other distillery (Caperdonich) was producing any peated spirit in the late 1980s when this would have been distilled - so this feels like a real treat.

Every whisky in the new core range is good and in its own different way be it for the age, price bracket or rarity. Each shows a different facet of the controlled experimentation going on at Benriach, which we have always thought of as something of an underrated distillery. This new range should help elevate it to a new audience, so that they can discover the joy of this Speyside gem.