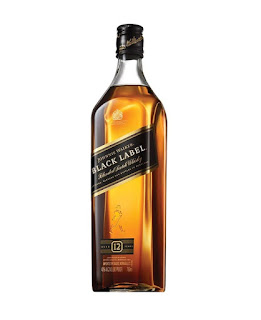 The Johnnie Walker Black Label forms part of the core range of best-selling blended whiskies from Scotch whisky giant Diageo. It sits between the Red Label and Gold Label in the range that also includes the Green Label 15 years old, 18 years old and Blue Label as permanent expressions. These are often joined by numerous limited editions and bottlings created for specific markets. All are created by a team of 12 blenders at Diageo, which is headed by the legendary Dr. Jim Beveridge OBE. The brand sells a staggering 18.5 million cases of whisky per annum worldwide - that is just over 220 million single bottles each year.

The Johnnie Walker range of blends is recognisable all over the world and is the biggest selling of any Scotch brand. It has also become a cultural icon. The Black Label was first introduced in 1909 and has remained within the core range ever since. It was part of a brand expansion that saw Walker's original Old Highland Blend evolve in to Red Label and Black Label, plus the now-defunct White Label, with the names referring to the colours of labels that helped to differentiate the whiskies for consumers.

The current expression has a minimum age of 12 years old, meaning that every single single malt and single grain whisky in the blend is at least a dozen years of age and in some cases older. It has been this age since the late 1970s and is the second largest expression for sales, after only the Red Label. Johnnie Walker Black Label is bottled at 40% ABV and is widely available through supermarkets, convenience stores and specialist retailers alike. A bottle should cost £25-30.

The colour is deep gold and the nose has an immediate mix of green apple, malted cereal and toffee aromas. These are followed up by soft and sweet peat smoke, honey and a hint of maple syrup. Then there are further aromas of vanilla, caramel and sultana in the background plus a pinch of cocoa powder.

On the palate the whisky is rich, creamy and very soft. The honey and toffee notes again rise early and are quickly joined by caramel, butterscotch and golden syrup notes. The malted cereal characteristic develops and becomes more influential. This adds a bittersweet quality and creates a more savoury feel, plus depth and structure. It works well with the sweeter elements and is accentuated by the soft peat that is reminiscent of bonfire smoke licking around everything. The smoke turns a touch more acrid and medicinal towards the end. Other notes of fudge, stewed apple, sultana and a hint of candied orange peel also come through to give further complexity.

The finish is of decent length and begins sweet and sugary. Crumbly brown sugar and toffee notes slowly fade and this brings the honey and apple characteristics forwards. These then fade too to leave the soft peat smoke and biscuit-like maltiness as the lasting features.

This is the first time that we have re-tasted the Johnnie Walker Black Label after a number of years. It was one of the first blended whiskies that we sampled early on our whisky journey. Even though we know much more about whisky now and have tasted many whiskies since, it still does not disappoint. It is full of flavour and this makes it easy to see why it remains so popular and sells so many bottles worldwide.

The Black Label is not the most complicated of whiskies but then that is part of its charm. It delivers plenty of aroma and flavour with just enough richness and peat smoke to notice, but not take it too far to any extreme. People will knock it down because it is so popular - this sadly seems to happen with every popular whisky - but we like it and would recommend it anytime. Delicious.

Below is a video review of Johnnie walker Black Label from our Allotment Dram series. To watch other such videos or subscribe to our YouTube channel - click here.