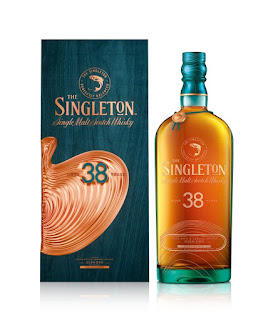 This whisky is a new and exceptionally rare single malt from the Highland distillery of Glen Ord, which is released under The Singleton label. The Singleton of Glen Ord 38 years old has been created using just eight cask by Maureen Robinson, the Master Blender for The Singleton brand since it was first released in 2004. The whisky has been in these casks for the final 26 years of its life after being earmarked for greatness when only 12 years of age. This is the longest secondary maturation in The Singleton history. These casks are ex-bourbon, ex-Pedro Ximenez sherry and virgin American oak, which have then been married back together to create this 38 years old.
The Glen Ord distillery is located in Muir of Ord, a small Highland town about 15 minutes drive north of Inverness. It was founded in 1838 by Thomas Mackenzie and is now owned by Diageo. They use it a one of their three homes of The Singleton single malt brand - Dufftown and Glendullan are the other two distilleries - and have expanded Glen Ord in stages over the last decade to to accommodate an increase in demand for the brand. The current capacity is now a hefty 11 million litres per year. It is also home to one of Diageo's large malting facilities.

"The Singleton 38 year old was crafted during an era that was a time of flavour experimentation and innovation in our whisky making. Selecting new American oak casks was very new for us then and we decided on a lengthy secondary maturation in this, plus two more traditional cask types, to unlock the decadent layers of flavour in this single malt."
Maureen Robinson.

The Singleton of Glen Ord 38 years old will be available in selected specialist whisky shops and luxury retailers in selected markets worldwide. There are just 1,689 bottles and these are released at the natural cask strength of 49.6% ABV. Each bottle will cost £2,100/ $2,750 US.
Our tasting notes
The colour is deep gold and the nose is extremely fragrant. Initial aromas of baked apple and caramelised pear are accentuated by further aromas of white pepper and cinnamon. Then comes a wave of dried fruits - think of sultanas, raisins and candied citrus peel with a hint of redcurrant. Background aromas of cocoa, coconut and gingerbread spice are also evident, as is a note of blackcurrant liquorice sweets.
On the palate this whisky feels silky and classy. There is plenty of milk chocolate notes up front, which are supported by an array of Christmas-like spices - imaging cinnamon, nutmeg, clove, mace and all-spice. The baked and caramelised orchard fruits from the nose - both the apple and pear - are there and are supported by a spoonful of apricot jam and some fudge. Tropical fruit notes threaten to develop - think of pineapple and mango especially - but then pull back before becoming too influential.
A distinct malted cereal note comes through with time and adds significant structure and depth to the whisky. Wood spices, such as cedarwood and sandalwood, join the Christmas spices and create a lovely warmth. Hints of other savoury notes - imagine leather, coffee grounds, beeswax polish and an old cigar box - give even more depth.
The finish is long and luxurious with the juicy tropical fruits and candied citrus peel leading the way. These fade to let the malt and spices take over as the other sweeter characteristics also slowly disappear. This leaves the finish as a warming, slightly drying but ultimately delicious experience.
What's the verdict?
The Singleton of Glen Ord 38 years old is a fabulous whisky and one that shows how good old single malts can be with innovative, yet careful and controlled maturation. The use of virgin oak casks 26 years ago, when virtually no one was using them to mature Scotch whisky, would have been seen as risky but along with the bourbon and Pedro Ximenez sherry casks they have combined to create a classic. Well done Maureen. Maybe not a 'whisky for everyone' given the price tag for this rare treat, but certainly a 'whisky for someone.
posted by Matt C at 5:47 PM