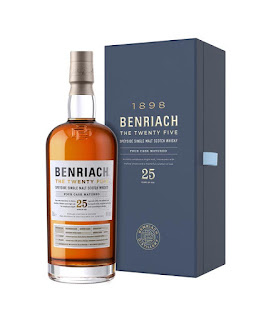 This whisky forms part of the newly revamped core range from the Speyside distillery of Benriach, which is designed to showcase their eclectic range of casks from around the world (these come from 20 different origins) and the three different spirit styles that are produced there - classic Speyside, peated Speyside (produced for only 5-6 weeks each year) and triple distilled (produced for just 1-2 weeks each year). The range has been entirely created by Dr. Rachel Barrie, the Master Blender for Benriach. The Twenty Five combines both classic and peated malts together and features four cask types - ex-bourbon, ex-Madeira wine, ex-sherry and virgin oak.

In addition to The Twenty Five the range also features two entry level 10 year old expressions - The Original Ten and The Smoky Ten, of which one uses the classic Benriach spirit and the other their peated spirit. There are also two 12 years old bottlings - The Twelve and The Smoky Twelve, again one classic and one peated. Then at this higher end there are age statements released at 21 and 30 years of age. All feature a marriage of at least three cask types, and in some cases four.

The Benriach distillery was founded in 1898 by John Duff and is located just south of Elgin. Following a long period of closure Benriach re-opened in the mid-1960s and became well known for producing high quality single malt to be used in blending. The practice of producing peated malt began in 1972 and has been maintained each year since. This short period is called the 'smoke season'. Triple distillation was first practiced in the late-1990s.

The current owners are Brown-Forman and the annual capacity is just over one million litres. All the whiskies are released in new packaging and further limited editions are due to be announced later this year and early in 2021.

Benriach The Twenty Five is bottled at 46% ABV and is both non chill-filtered and of natural colour. It will be available worldwide from specialist whisky and luxury retailers. A bottle will cost £325/ $425 US.

The colour is a deep gold and the nose has a lovely set of aromas - think of a combination of baked apple, golden syrup, raisins, fresh peach and milk chocolate. Underneath are further hints of toffee, orange oil and an underlying sweet peat smoke. This brings out other savoury notes such as delicate baking spices, earthy malt, tree bark and bitter nuts (think of walnut especially).

On the palate this whisky has a viscous and luxurious, almost chewy, feel with an immediate note of fresh peaches and apricots coming through. These are supported by further fruity notes of green apple and dark cherry, plus some golden syrup and toffee. Then comes the sweet peat smoke and this has a mellow yet slighty dusty quality. It seems the lick around all the other characteristic and accentuate them, but also helps to develop some savoury notes and balance. Dried nuts (think of walnut, hazelnut and brazils) come through and remind us of a Christmas nut selection bowl, then gripping oak spices and a pinch of cinnamon also. Late notes of milk chocolate, honeycomb and cinder toffee round things off nicely and add yet further depth.

The finish is of decent length and maintains this gripping and chewy quality. The sweet toffee and syrup note, plus the different styles of fruit, slowly fade and finally give way to the more savoury elements. The malt, oak spices and sweet peat smoke linger well and seem to bounce off each other. Delicious.

Another excellent whisky in the new Benriach core range and one which leaves us with only The Thirty to try now. All have been of high quality but each in a different way. The Twenty Five feels very special and this is especially true when you realise that virtually no one else was making peated single malt in Speyside 25 years ago, let alone maturing it in non-traditional cask types. This makes it a rare treat and one that lives up to the expectations.

Benriach really does seem an under rated/undiscovered distillery that more people should try and be aware of. Hopefully this new selection of delicious whiskies at different ages and price points will see that happen.