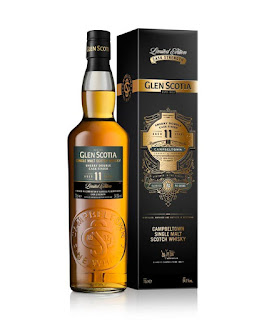 This 11 years old Sherry Double Cask Finish is a new limited edition single malt from the Campbeltown distillery of Glen Scotia. The new whisky is created using first-fill ex-bourbon barrels that were filled with Glen Scotia's unpeated spirit in 2008, which were then split between ex-Oloroso and ex-Pedro Ximenez sherry casks for a finishing period. It is unusual as Glen Scotia normally has a small amount of peat. These casks were then married back together in ex-bourbon casks for a short period, before bottling at 11 years of age and at the natural cask strength of 54.1% ABV. The whisky is also non chill-filtered and of natural colour.

Glen Scotia was founded in 1832 by the Galbraith and Stewart families. It is one of only three distilleries remaining in Campbeltown - the others are Glengyle and Springbank. Campbeltown was formerly a powerhouse of the Scotch whisky industry, particularly in late Victorian times when over 30 distilleries operated in the town, but then fell on hard times. Glen Scotia is the only single malt distillery in Scotland to have steel alloy stills rather than copper and is currently owned by The Loch Lomond Distillery Co. The distillery is relatively small, very traditional and has an annual production capacity of 800,000 litres.

The Glen Scotia 11 years old Sherry Double Cask Finish has just 15,000 bottles and these will be available via online and specialist whisky retailers worldwide. A bottle will cost £65/ $86 US.

The colour is deep golden yellow and the nose is rich and full of aromas of toffee, fudge and butterscotch. Underneath are further aromas of manuka honey, green apple and cookie dough. Dried fruits such as sultanas, raisins and candied lemon also come through later, along with some milk chocolate and dusty malt.

On the palate this whisky has an initial creamy and sweet feel. This is despite the high ABV. Vanilla and that manuka honey from the nose combine with milk chocolate, icing sugar and marshmallow to give an interesting welcome. A distinct note of candy floss then comes through to add to the heightened sweetness. Dried fruits - think of raisins and sultanas again - and fresh green apples develop well and add depth. Balance is finally provided with some much needed savoury notes - these have a slightly funky edge and remind us of damp earth and moss. The cookie dough and dusty bittersweet malt from the nose give further complexity, along with a good pinch of warming baking spices. Cinnamon and all-spice are particularly prominent.

The finish is of decent length and becomes increasingly savoury with time. The obviously sweet notes, plus the fruity one, fade to leave the malt and spices to do battle. The result is warming and drying with a distinct earthy characteristic as the final remaining note.

As fans of Glen Scotia, we were looking forward to sampling this new limited edition. What we discovered was something quite different from any other that we have previously tasted from the distillery. The Sherry Double Cask Finish is distinctly a whisky of two halves, to use the classic football quote. It is super sweet and sugar-heavy up front before flipping to become savoury, earthy and spicy. Interesting but ultimately slightly confused.