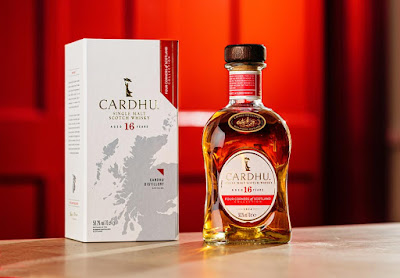 Diageo have announced the third bottling in their Johnnie Walker 'Four Corners of Scotland' range. Each will represent one of four of the company's single malt distilleries that are important to the creation of Johnnie Walker. Each distillery is undergoing major renovation to its visitor centre. All are bottled at 16 years of age. The third bottling is the Cardhu 16 years old and celebrates the opening of the new visitor centre at the Speyside distillery. It follows the Glenkinchie and Clynelish 16 year olds, representing the Lowlands and Highlands respectively.
The Cardhu 16 years old Four Corners of Scotland is constructed from whisky matured in both re-fill and freshly charred American oak barrels, which are then married together after 16 years. It is bottled at the natural cask strength of 50.6% ABV and there are just 3,000 bottles. These will only be available exclusively at the Speyside distillery's visitor centre. Each bottle will cost £150. 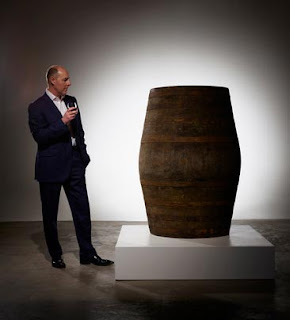 Gordon & Macphail
The family-owned independent bottling company of Gordon & Macphail have announced the forthcoming release of what is thought to be the world's oldest ever single malt to be bottled - the Gordon & Macphail Generations 80 years old from Glenlivet Distillery. The whisky was distilled and filled to cask (Cask #340) on February 3, 1940 and has been maturing in the company's Elgin warehouse ever since. Then in February 2020 the decision was taken to finally bottle the eight decade old whisky. Stephen Rankin, Director of Prestige at G&M, is pictured left with Cask #340.
The 80th anniversary of something is the oak anniversary, so they have decided to use the oak cask within the packaging of each bottle. This has seen Gordon & Macphail collaborate with Sir David Adjaye OBE, the internationally renowned architect and designer. His design for the decanter and presentation casket will be revealed at the official launch in September. Cask #340 has yielded just 250 bottles and these will be released at the naturl cask strength of 44.9% ABV. More details, including availability and price will also be revealed in September.
Get Social With Us
Follow us for regular whisky updates and activities throughout the week.

posted by Whisky For Everyone at 4:51 PM