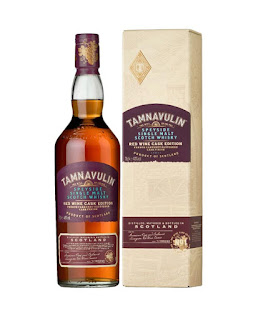 This whisky forms part of the core range from the Speyside distillery of Tamnavulin. The Red Wine Cask Edition has first been matured in American white oak ex-bourbon barrels before a finishing period in ex-Cabernet Sauvignon wine barrels sourced from France. It sits alongside two other wine cask finished whiskies in the range. These have been part-matured in ex-Grenache and ex-Pinot Noir wine barrels. All three are released with no age statement. The core range also features the best-selling Double Cask, the Sherry Cask Edition, a travel retail exclusive Tempranillo Finish and a series of limited edition vintages dating back to 1970.

The Tamnavulin distillery is located in the hamlet of Tomnavoulin and sits on the banks of the River Livet near Ballindalloch. It was opened in 1966 by the Tamnavulin-Glenlivet Distillery Company, a subsidiary of Invergordon Distillers Ltd. The name of the distillery translates as 'the mill on the hill' from local Gaelic. Tamnavulin was closed for 12 years between May 1995 and July 2007. It was reopened by Whyte & Mackay who remain as the owners. The distillery has a large capacity of 4 million litres a year with most be allocated for blending contracts. The Distillery Manager is Joanne Reaveley.

The Tamnavulin Red Wine Cask Edition is bottled at 40% and is available in the UK through specialist retailers and some high-end supermarkets. A bottle should cost around the £32-£35 mark.

The colour is deep gold with a hint of reddish amber to it. The nose is fragrant with initial aromas of green apple, honey and milk chocolate. Then come further aromas of toffee, butterscotch and cinnamon stick with hints of dried fruits and orange marmalade. A late hint of gingerbread cookies and a whiff of marzipan add further depth.

On the palate this whisky is so soft and mellow. It feels velvety and gentle with the sweeter notes from the nose appearing first, giving a confected edge. Butterscotch, toffee and heather honey mingle with chocolate hazelnut spread and dried fruits - think of raisin, sultanas, prunes and candied orange peel. Candied limes also come through later on. Then comes some more bitter and warming notes. Gingerbread and increasingly influential baking spices (imagine cinnamon, all-spice and a hint of nutmeg) develop and are complimented by oak tannins and a pinch of high percentage cocoa powder. Delicate biscuit-like cereal and green apple notes underpin everything.

The finish becomes drier with more tannins that grip to the tastebuds. This lengthens everything. This is especially true once the sweet butterscotch, honey and dried fruit notes fade. This allows the warming baking and oak spices to linger well.

Another lovely offering from Tamnavulin, which seems a really underrated Speyside distillery. Everything we have sampled recently has been delicious, fruity, soft and flavoursome. Also, the prices for each bottling have been very competitive. It offers a classic Speyside style that is uncomplicated, approachable and does not break the bank. Would be a perfect choice of distillery for a whisky beginner or non whisky drinking friend. Very nice.