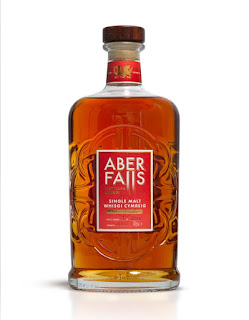 This bottling is the first ever single malt whisky from the Aber Falls distillery in north Wales. The Aber Falls Inaugural Release features some of the very first barrels of single malt produced at the distillery back in 2018. This was the first whisky distilled in north wales for 100 years. It has been matured in a combination of three cask types - European oak first-fill ex-Pedro Ximenez sherry casks, American virgin oak barrels and rare European oak ex-orange wine casks. These have then been married together by Dr. Kirstie McCallum, the Master Blender of Aber Falls. The Aber Falls Inaugural Release is bottled at 46% ABV and is limited to just 2,000 bottles. Each bottle was sold for £45.

Aber Falls distillery was founded in 2017. It is located in the town of Abergwyngregyn close to the Aber Falls waterfall from which it takes its name. Production of single malt began in 2018 and is made using 100% Welsh barley and water that has flowed over the waterfall. Prior to that they distilled gin, which has already started to pick up awards globally. Then in 2019 they also started the production of small batches of Welsh rye whisky. Aber Falls is owned by Halewood Artisanal Spirits.

Unfortunately, this Inaugural Release sold out very quickly on the date of release so is no longer available. If you like the sound of it, then you will either have to search auction sites for bottles or wait for the distillery's second release.

The colour is deep gold and the nose is heady and fragrant. Aromas of vanilla and manuka honey lead the way, and are followed by further aromas of baking spice and oak. Think of cinnamon stick, all-spice and fresh wood shavings. Underneath are juicy fruits, especially sultana and peach. Later aromas of apricot compote, cocoa powder and orange oil add further depth.

On the palate this whisky feels juicy and luscious. There is an initial white pepper-like heat but this quickly subsides to reveal notes of juicy plump sultanas, candied orange peel and golden syrup. These are followed by further notes of apricot jam, heather honey and milk chocolate. There is also a hint of confected sweetness in the form of marshmallow or cream soda.

Then the warming spices and woody notes begin to develop in earnest. Gingerbread comes through nicely and is joined by pinches of cinnamon and clove powder. These spices continue to become more oaky and woody with time. Think of fresh sawdust and oak shavings in particular. This brings back the initial heat and gives a pleasant dryness to the end palate.

The finish is of decent length and carries on the warm and drying direction. The ginger-like note, cinnamon and oak are particularly influential now, especially once the sweet and fruity characteristics have faded. Delicious.

We, like many other whisky fans, are always interesting in tasting the first release from a new distillery. We always like to see what the spirit is like and which direction a master blender decides to take it. This Aber Falls Inaugural Release is very promising on both counts. The spirit character shines through but is complimented well by a creative mix of cask types. The result is lovely.

Hats off to Halewood too for the pricing. They could have charged much more for this inaugural release, as others have in the past. This is a double edged sword though, as it sold out quickly and left people that missed out disappointed. But there is always next time. It will be very interesting to see what future releases bring.