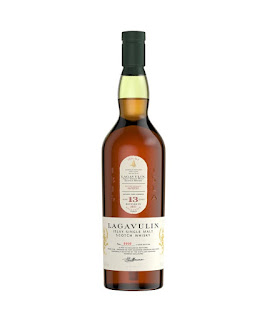 This whisky is one of two limited edition single malts from Diageo to celebrate this year's Feis Ile festival. The other is from Lagavulin's fellow Islay distillery of Caol Ila - read our review of that release here. This Lagavulin is a 13 years old expression and this was initially matured in re-fill American oak casks, before being transferred to high char ex-Port barrels for a finishing period. These were selected by Pierrick Guilaume, the Distillery Manager at Lagavulin. There are 6,000 bottles and the whisky is released at the natural cask strength of 54.4% ABV. Each bottle will cost £160. Both whiskies will be available exclusively from the Lagavulin distillery shop and www.malts.com.

The Lagavulin distillery was founded in 1816 by John Johnston and is currently owned by Diageo. It has an annual production of approximately three million litres. The whisky produced there is split between the Lagavulin single malt range and for use within Diageo's extensive set of blends, where it is one of the prominent malts in White Horse.

The colour is pale gold and the nose is rich, vibrant and smoky. Savoury aromas of damp moss, peat and coal tar soap rise from the glass. Underneath is a distinct malty aroma that is reminiscent of oat cookies. Sweetness comes through later in the form of honey, vanilla, milk chocolate and dried fruits - think of raisins, currants and sultanas especially with a hint of candied orange peel.

This whisky switches on the palate and brings the sweeter notes forward, then the peaty and smoky ones. Runny honey, golden syrup and milk chocolate appear first, followed by crumbly muscovado sugar and the dried fruit selection from the nose. This gives a delicious viscous and luxurious feeling. There is also a hint of treacle toffee that comes throough late on.

Next comes the biscuit-like note (again think of oat cookies, but with a pinch of powdered cinnamon and ginger added this time), before the full force of the peat smoke develops. The high ABV gives this element plenty of power and punch, with a peppery and almost chilli-like feel. Notes of damp earth and moss evolve into bonfire ash (imagine charcoal or dying embers) and a hint of something surgical (think of antiseptic, bandages and that coal tar soap again.)

The finish is very long, warming and drying. The luscious sweet and dried fruit notes gradually fade and this leaves the distinct maltiness and peat smoke to shine. The ash and peat give a gripping dryness while the peppery nature and a late hint of ginger biscuits give depth and warmth.

This Lagavulin 13 years old Feis Ile 2021 Edition is a stunner. The combination of the robust peat smoke and the sweetness from the American oak and Port casks is sublime. The result is balanced and delicious, so hats off to those that have created it. The layers of aroma and flavour within the whisky are also superb and give great complexity. We shall definitely be adding a bottle to our collection. If you are also interested, then do not hesitate as it will undoubtedly sell out soon.