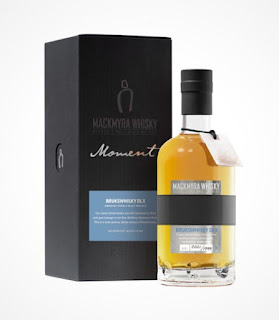 This new whisky is the latest addition to the exclusive Moments series from the Swedish single malt distillery of Mackmyra. The Mackmyra Brukswhisky DLX pays homage to the classic Brukswhisky expression, which is part of the brand's core range. The recipe and casks used are exactly the same as for Brukswhisky but with much greater maturation time in the casks. All whiskies used are between nine and 14 years. The cask types are ex-bourbon (both 100 and 200 litre size), ex-Oloroso sherry and Swedish oak. All have been matured in Mackmyra's Bodås warehouse, which is housed underground in a former iron mine.
Mackmyra was founded in 1999 by eight friends who decided to build Sweden's first single malt distillery. The original distillery was replaced in 2012 by a larger new eco-friendly distillery in the town of Gävle. This state-of-the-art distillery is 37 metres high, cost an estimated £50 million to build and uses gravity during production - malted barley is fed in the top and new make spirit comes out of the bottom. The distillery has recently won an Icon of Whisky award for sustainability. The annual production capacity is around 525,000 litres.

"Brukswhisky has always had a place close to my heart. The DLX is a celebration to the original, but also stating that we are now an established distillery. With increased age and longer periods in casks the complexity is elevated and with a reinvigorated freshness and fruitiness."
Angela D'Orazio - Master Blender at Mackmyra.

The Mackmyra Brukswhisky DLX is bottled at 46.6% ABV and there are just 1,999 bottles. These are available in specialist retailers in selected markets including Germany, Sweden and the UK, plus via www.mackmyra.com. Each bottle will cost £109/ €122.49.
Our tasting notes
The colour is pale golden yellow and the nose is fresh, vibrant and uplifting. Initial aromas of honey, vanilla and crisp green apple rise from the glass. Then come hints of white chocolate and lemon zest, following by a developing warmth and spice. This has a peppery feel with some woody aromas - imagine cinnamon bark with some fresh oak shavings or sawdust.
On the palate this whisky continues on the fresh and vibrant theme. The crisp green apple and white pepper notes from the nose rise first and these are followed by the sweeter elements. This includes lovely notes of honey and vanilla plus hints of butterscotch, dessicated coconut and a twist of lemon zest. This delicious combination is enhanced by the developing woody and spicy note - think again of freshy shaved oak or sawdust and pinches of cinnamon and all-spice. There is also a hint of something like apricot jam in the background. Further hints of white chocolate, cocoa powder, and gingerbread add further depth. These are joined late on by an increasing note of liquorice and aniseed.
The finish is of decent length and becomes more drying and warm with time. This seems to come to a head once the sweeter characteristics and green fruit notes have faded. This leaves the woody and oaky notes, plus the white pepper and ginger, to thrive and this is accentuated by another late hit of liquorice.
What's the verdict?
This Brukswhisky DLX is another delicious offering from Mackmyra. We like their ethos of 'controlled experimentation' and innovation, and this has produced some unorthadox yet delicious whiskies over the years. This one is also delicious but has more of a traditional feel. Only the use of a small percentage of Swedish oak matured whisky elevates it above that.
We also like the idea of recreating a classic, such as the Brukswhisky, by using the same recipe and percentages of casks but older. Our only query is really whether this is different enough from the original to warrant being nearly three times the price as that original? Only you can decide that, but we are glad to have our bottle.
posted by Matt C at 4:50 PM