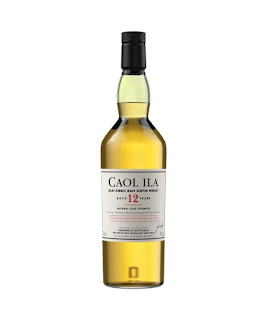 This whisky is the annual limited edition Feis Ile bottling from the Caol Ila distillery. It is joined by a 13 years old expression from Diageo's other Islay distillery of Lagavulin. This Caol Ila is bottled at 12 years of age and has been matured firstly in re-fill American oak casks before being transferred to ex-Moscatel wine casks for a finishing period. These casks were nurtured by Samuel Hale, the Distillery Manager at Caol Ila. The Caol Ila 12 years old Feis Ile 2021 Edition is released at the natural cask strength of 56.6% ABV. There are just 3,000 bottles and each will cost £130. Both whiskies are available via www.malts.com and the Lagavulin distillery shop.

Caol Ila was founded Hector Henderson in 1846. It is located on the rugged north eastern coast of the Hebridean island of Islay, close to the hamlet of Port Askaig. The distillery looks across the Straight of Islay, the fast flowing channel of water after which it is named, to the neighbouring island of Jura. It is a large distillery with an annual production capacity of 6.5 million litres and is owned by Diageo.

Caol Ila is a major ingredient in their Johnnie Walker range, especially in the smoky Black Label expression. The visitor centre is currently closed but will reopen later in 2021 as the fourth destination in Diageo's 'Four Corners of Scotland' Johnnie Walker experience. The other three distilleries are Cardhu in Speyside, Clynelish in the Highlands and Glenkinchie in the Lowlands.

The colour is pale gold and the nose has a heady mix of aromas. First comes the peat smoke - this has a charcoal and ashy quality with a hint of damp vegetation or moss. The smoky aromas are backed up by a sumptuous sweetness. This is most reminiscent of honey, golden syrup and toffee with a suggestion of milk chocolate and sultanas evolving later on.

On the palate this whisky is immediately juicy and sweet. The honey and golden syrup notes from the nose rise first, as does the chocolate and sultana. The sultana in particular adds to the sugary and juicy nature of the mouth feel. There are also notes of green apple, vanilla pod and butterscotch along with a pinch of white pepper and clove. The peat smoke punches through the sweetness and entangles itself around everything. This again feels charcoal-like and is reminiscent of wood ash and dying embers. There is also a hint of damp moss and seaweed in the background, along with a developing malty note of oat biscuits. A twist of lime zest and more juicy sultanas round things off.

The finish is long and warming with the ashy smoke and biscuity notes particularly prominent. This gives a drying quality, especially as the sweet and fruity characteristics fade to reveal the ashy and biscuity elements further. A hint of ginger and cinnamon spice also come through nicely.

This is a delicious offering from Caol Ila for this year's Feis Ile, the annual festival held on Islay to celebrate the island's whisky and music. Sadly this year it has been held virtually again due to the Covid-19 pandemic restrictions in Scotland. But that has not stopped most of the distilleries releasing a special bottling.

This limited edition wraps up classic Islay peat smoke with sweet and juicy fruit notes from the exotic ex-Moscatel cask. This cask type is not used often to mature Scotch whisky and this bottling makes you wonder why as the Caol Ila 12 years old Feis Ile 2021 Edition is a cracker.