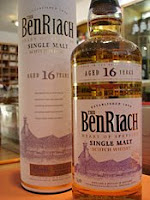 Benriach is one of the last remaining independently owned distilleries in Scotland. It was originally opened in 1897 and is based in the heart of the Speyside region, near to the town of Elgin. The distillery has been closed twice, once for over sixty years between 1903 and 1965 and for a second time in 2002. The current owners, Benriach Distillery Company, re-opened and started production in 2004 and have turned it in to one of the most innovative distilleries. Benriach release a traditional Speyside style core range, of which this 16 years old is part. This core range is joined by another range of whiskies that are finished in different wine casks or made with peated malt or in some cases both. These practices, especially using peated malt, are unusual methods for a Speyside distillery and the current owners decided to do them in order to attract new customers, especially younger people and women, to their whiskies.

This whisky is light for its age and straw-like in colour. The nose is again light with a lovely combination of vanilla, butterscotch and some woody nuttiness (imagine coconut). There is also some sweet malted barley coming through (think of a sweet style of bread, like rye). On the palate, this is slightly creamier and heavier than the nose indicates but is refreshing and cleansing. The vanilla and butterscotch elements are prominent and these are joined by that coconut, something also nutty but creamier (reminding me of hazelnuts), something a bit sugary (think of honey), some more malty cereals and a hint of spice (think of nutmeg). The finish is dominated by vanilla and the woodiness, with the latter making it slightly bitter. Benriach 16 years old is a very good example of a light, refreshing whisky and is complex for something of this style. It would be perfect for drinking on a warm day or as an introduction drink for someone who thinks that they don't like scotch whisky. A bottle should cost around £35 from independent retailers.
posted by Matt C at 1:23 PM