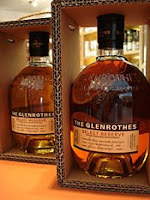 Glenrothes is one of the largest scotch whisky distilleries in the Speyside region of Scotland. The distillery is located in the town of Rothes and has a capacity of 5.5 million litres per year. Despite its size, Glenrothes remains fairly unknown as the current owners, The Edrington Group, use a majority of the whisky produced in their flagship blends of Famous Grouse and Cutty Sark. The single malt range has recently been revamped with Edrington promoting Glenrothes more than ever before. As a result, the sales, reputation and awareness of the product are growing all the time. The restyling included the introduction of the distinctive bulb shaped bottle, minimal corrugated cardboard package and the whiskies being labelled as vintages rather than of a certain age. The core range now includes this Select Reserve (the only one with no vintage, but it is rumoured to be around 8 years of age), the 1994, 1991 and 1985. The vintage dates refer to the year of distillation.

Glenrothes are well reknowned with whisky circles for the quality of their sherry casks that are used for maturation. The use of sherry cask can be seen in the colour. It is a dark golden brown with a slight red tint. The nose has a lot of fruit on it (think of dried fruits like raisins and sultanas) and this is joined by a lovely sweet cereal note (imagine a malty biscuit), something citrus (think of candied orange peel) and a hint of spice (nutmeg, I think). The overall feeling is reminiscent of a fruity Christmas cake. All of these elements combined on the palate to give a sumptuous, creamy and rich feeling. The candied peel and nutmeg spice are particularly prominent. The finish is disappointingly short for a richer whisky and some raw spirit comes through, which spoils the previous experience from the nose and palate. You often get this raw spirit appearing in younger whiskies as the alcohol has not had enough time to mature and evolve with the other characteristics coming from the cask. However, this whisky is a decent example of a whisky that has been matured in a sherry cask and worth a try for the price. It is becoming more widely available with a bottle selling for £30-35.
posted by Matt C at 7:43 AM