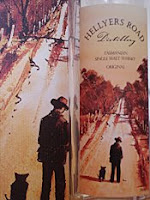 Hellyers Road is the largest distillery on the island of Tasmania, Australia's often forgotten island state. Tasmania is home to a number of the distilleries in Australia's fledgling whisky industry, due to it having the most Scottish-like (relatively mild) conditions on the continent. Hellyers Road is located in the northern city of Burnie, approximately two hours north west of Launceston. The distillery is owned by Whisky Tasmania, which is the alcohol producing branch of the Betta Milk Company, and was established in 1997. The situation of a distillery being owned by a milk company is unusual but Hellyers Road produces single malt whisky and premium vodkas on the site. It is named after Henry Hellyer who was one of the first Europeans to land on Tasmania in 1825. The site of this first landing is on the rugged coastline a few kilometres to the north of the distillery. The single malt release is five years of age and made from Tasmanian barley, rainwater collected at the distillery and locally grown yeast. The whisky is then matured in American oak ex-Tennessee whiskey casks purchased from Jack Daniels.

The colour of this single malt whisky is very light and is a lemon, straw yellow. On the nose, this is light and grassy (imagine freshly cut grass) with lots of crisp, fresh green fruit (think of pears and apples - this is a classic characteristic of younger whiskies), vanilla and a hint of citrus (think of lemon zest). On the palate the whisky feels slightly fuller bodied than expected from the light nose. It is creamy with heaps of vanilla and that grassy element again. It also has a slightly sharp sugary taste (imagine caramel) with something nutty coming through (can't put my finger on it, but it had bitterness like a walnut). The finish was very short, sharp and quite rough, leaving the taste of raw spirit in the mouth. This was disappointing as the whisky had shown good potential to this point. Hellyers Road's lightness and refreshing nature would make it good for drinking in hot weather or with a mixer.

Distribution is spreading but is still mainly confined to Australia and some parts of South East Asia. We got to try some on our recent trip to Australia but found it very hard to find this or any other Australian/ Tasmanian whiskies in any shops. The ones we did find were extremely expensive in comparison to Scottish or other imported whiskies. This retails (if you can find it!) at $70-80 a bottle (around £35-40).
posted by Matt C at 1:44 PM

The good people of Hobart will be shocked to find they no longer live in the State Capital. All the bureaucracy will have to move north to the new capital, a two hour drive.