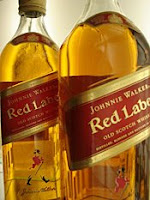 Red Label is part of the world famous Johnnie Walker range of blended whiskies. This series of whiskies are among the best selling around the globe with the Red Label forming the cornerstone of this success. It is the best selling whisky in the world and contributes almost 10% of all worldwide whisky sales. This gives the staggering statistic that every one in ten bottles of whisky sold in the world is Johnnie Walker Red Label! The success is built on the original Johnnie Walker blends being exported during Victorian times around the British Empire. As the Empire expanded, more people enjoyed the range and brand has never looked back. This is shown in the fact that Johnnie Walker whiskies were already exported to 120 countries before Coca Cola had even left America in the 1920s! The brand and the famous walking man logo are embedded in world culture and pioneered sports sponsorship in the 1960s by sponsoring a motor racing Grand Prix team and other major events, such as golf.

The brand is currently owned by multi national drinks company Diageo, who blend whiskies from across their distillery portfolio including some which only operate in order to supply the Johnnie Walker range. The Red Label carries no age statement and is joined in the range by the Black Label (minimum age of whisky in this is 12 years), Green Label (minimum age 15 years), Gold Label (minimum age 18 years) and the legendary Blue Label (no age stated but the youngest whisky in it is rumoured to be 28 years old and some of the whisky is from rare and closed distilleries).

So it was time to see what the fuss is about ... the Red Label is quite lively and aromatic on the nose. There is an initial sweetness that is malty (think of grains and cereals) and fruity (imagine dried fruits like raisins and sultanas), but then a nice peatiness comes through (think of damp earth) and something a bit nutty (almonds, I think). The palate is again vibrant and suggests some youthful whisky is present. That initial, almost sugary, sweetness is there again with the smokiness more prominent. It becomes quite warm and spicy (think of ginger) and has a slight salty tang also. The finish lingers and is again fairly spicy and a bit fiery (imagine black pepper). The sweetness is much less with the dried fruitiness, smoke and salt combining well. This is a decent, enjoyable whisky and it is easy to see why so it is so popular. It has complexity with a good level of sweetness and not too much smokiness. This would be good to drink straight, with a mixer or in a cocktail and is well priced at £15-20 a bottle.
posted by Matt C at 10:28 AM