In the whisky cupboard ... Nikka 'Whisky From The Barrel' 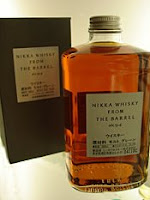 Nikka are one of the biggest producers of single malt whisky in Japan. It is a company that forms part of the massive Asahi Brewery Company and they own two distilleries - Miyagikyo and Yoichi. Miyagikyo is located on the eastern coast of Japan's main island of Honshu to the north of Tokyo and Yoichi can be found on the western side of the northern island of Hokkaido. This 'Whisky From The Barrel' forms part of a series of vatted whiskies that are released by Nikka. Vatted whiskies are produced using single malts that are mixed together. These single malts may be of differing ages and from different distilleries. They are similar to blended whiskies in this respect, but blends include whisky made from other grains. Vatted whiskies only include single malt whisky produced from malted barley. In this case, Nikka have used different ages of single malt from both Miyagikyo and Yoichi and married them together over time. The 'Whisky From The Barrel' is a multi award winning whisky, including scooping the Best Japanese Blended/Vatted Whisky prize at The World Whisky Awards 2007.

This bottle was received recently as a present and has been exclusively labelled for La Maison du Whisky shop in Paris. It is bottled at cask strength (51.4% ABV) and the colour is a golden orange brown with a very pleasant nose. There is plenty of sherry cask influence here with lots of dried fruits (think of raisins and sultanas), candied peel (especially orange), some malted barley (imagine a rustic loaf of bread) and something reminiscent of dark chocolate or espresso coffee. These characteristics are replicated on the palate. It is rich and succulent with a lovely level of sweetness and a touch of spiciness (think of nutmeg or cinammon). This whisky is deceptive and certainly does not taste or feel like cask strength. That could be dangerous on future evenings! With a drop of water, a sugary sweetness appears (imagine caramel) and the candied orange peel springs to life even more. The finish is long, fruity and sumptuous.

'Whisky From The Barrel' is an excellent whisky and one of the best blended or vatted whiskies that I have tried to date. If you have tried the Hibiki 17 years old blend from other Japanese powerhouse whisky company, Suntory, then this is in the same vein (although considerably cheaper!). A great example of how the use of quality sherry casks can influence whisky during maturation. It is still relatively difficult to find but distribution is improving to Europe and the UK. A 500ml bottle should cost £20-25 from selected independent whisky retailers.
posted by Matt C at 10:21 AM

Thanks for the information. I saw a bottle at a local wine shop and was curious about it. Sounds like it is worth trying.

16 months after your excellent review, I've still only seen this whisky at Dutyfree in Paris CDG airport. Current price is EUR 26 dutyfree. A most excellent whisky, worthy of any collection.

Nikka from the barrel should be a blended whisky. The components (written in Japanese on the bottle) include grain.

Although, in a blind tasting, no one picked that up.

Nikka from the barrel is a must. My favourite. !'ve bought my bottles in Norway and Sweden.