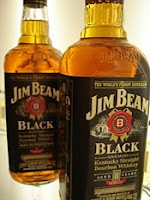 Jim Beam is the best selling bourbon in the world and sits comfortably within the global top 10 for all spirit sales. The current distillery was built at the end of the Prohibition period in 1933 in the town of Clermont, Kentucky and they also own another smaller distillery in Nelson County. The Beam family have a greater whisky heritage though, with their first distillery dating back to 1795. This was founded in Washington County, Kentucky by a German immigrant called Jacob Boehm (his surname later became Americanised to Beam). His grandson and great grandson also set up distilleries in different parts of Kentucky before they were all closed down due to Prohibition in 1920. The current range of bourbons include the highly popular flagship White Label (approximately 3-4 years old and 40% ABV), this Black Label (8 years old and 43% ABV) and the Small Batch (a combination of just a few selected casks of differing ages). On our recent trip to Australia, we discovered that Jim Beam is extremely popular there and outsells all other whiskies by a huge margin. The range in Australia includes pre-mixed cans of Beam & Coke and some bars even had this mix on tap!

This Black Label has a lovely dark golden colour and the nose is packed with oak, vanilla and sweet grains. There is also further sweetness present that comes through later (imagine honey and caramel). On the palate, the vanilla and oakiness are again prominent but more complexity evolves once you get beyond this. It feels creamy and warming in your mouth (think of warm spices like cinnamon or nutmeg), with a lovely mellow sweetness (those grains and that honey again) and an interesting yeasty note (imagine a sweet style of bread like sweet rye). The finish is reasonably long with the sweetness becoming drier and oakier. The warm spices really come through well also. This is a good bourbon that has depth and complexity that some of the cheaper American whiskies lack. A bottle should cost between £20-25.
posted by Matt C at 1:25 PM

Black Label is a mere couple of dollars more than the White Label but boy what a difference! Black Label provides far more complexity of flavors (vanilla, oak and charcoal), weaved elegantly into a dram that will keep you coming back.

Great value for money! Also a great introduction to bourbon.