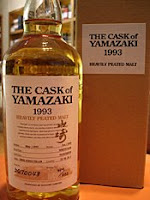 Yamazaki is the oldest whisky distillery currently operating in Japan. It was founded in 1923 by the legendary father of the Japanese industry, Shinjiro Torri, and is located in the small town of Yamazaki that lies between the major cities of Kyoto and Osaka. The distillery capacity is 3.5 million litres and is currently owned by Suntory. The Suntory company was founded by Torri in the 1930s and its name is derived from the Japanese version of his name Torri-San. Yamazaki whiskies are becoming more popular all the time, with the core range consisting of a 10, 12 and 18 years old. Yamazaki also contributes whisky to the award winning Hibiki blended series. This bottling is released in single cask batches and is the first heavily peated Yamazaki to be made available on general sale. Having said that, you will still have to search it out in independent whisky retailers and a bottle should cost between £80-90.

The cask for this release contains just over 500 bottles and they have been stored in a combination of bourbon and mizunara (Japanese oak) casks. It is bottled at cask strength (an extremely high 62% ABV) and 15 years of age. The peating level of the malted barley is 26ppm (phenols per million), which is 'heavily peated' by Japanese standards. By comparison, the heavily peated Scottish whiskies from Islay are around 50ppm, so this Yamazaki is around the similar peating level to Bowmore or Highland Park. The colour is a pale gold and the nose is extremely intense. The high alcohol level attacks you but once this passes the sweetness and smokiness comes through. The sweetness is full of cereal grains and vanilla, with the smokiness being quite earthy (almost damp earth or moss). On the palate, the alcohol and the smoke (more like coal smoke now) give way to a more subtleness. The cereal sweetness is present again, along with some vanilla, tropical fruit (sounds weird I know, but imagine pineapples and lychees) and something herbal (think of dried grass or straw). Due to the alcohol strength, this can take quite a lot of water and still hold itself together. It becomes much sweeter with the vanilla and some honey particularly prominent. The smokiness becomes earthy again and the whole experience is more rounded and enjoyable with the addition of water. The finish is very smoky and lingers on and on, becoming quite herbal (think of straw again) and bitter right at the end.
posted by Matt C at 11:43 AM

this reminds me i have got to start building my jap collection.
jeff, u got any?