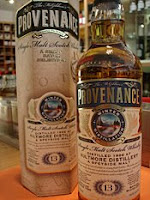 Aultmore is a little known distillery in the Speyside region of Scotland. It is located close to the town of Keith and is owned by John Dewar & Sons. The distillery is relatively large, producing 3 million litres per year, and is highly regarded by blenders and blending companies. Aultmore forms a constituent part within Dewar's range of blend plus a number of others, including the popular VAT 69. As a result, nearly all the whisky is used in the blending process and little is left for release as a single malt. There is no actual official release from Aultmore, with only a few limited independent bottling releases on the market. However, even these are difficult to find and are restricted to selected whisky specialist retailers.

This one is released by Douglas Laing & Co as part of their 'Provenance' range of whiskies. A bottle will cost around £45. On the nose, this whisky is light, fresh and entices you to try it. There are some crisp green fruits (think of pears and apples), sweet malted barley, vanilla and honey. Unfortunately, this promise is short lived and the palate is very different. It has a sugary sweetness (think of burnt caramel) which is not too bad but this is overtaken by a slightly unpleasant woody bitterness. With time this fades and reveals nicer nutty (think of almonds) and spicy elements (imagine cinnamon). The finish is quite long and pleasant before turning bitter again right at the end. Aultmore is an obscure distillery and it can be seen that this whisky would be well suited as a blending whisky, where other whiskies join and compliment and enhance each other. As a single malt, this release is slightly disappointing following the promising start. Definately worth a try as its always good to taste whisky from different, lesser known distilleries.
posted by Matt C at 7:24 PM