This week sees the Islay Whisky & Music Festival (known as Feis Isle in Gaelic) taking place on the famous whisky producing island of Islay in Scotland.  The Festival sees whisky and music fans converge on the island in their thousands to sample some of the finest Scotch whisky and equally fine Scottish music.  As part of the Festival, each of Islay's eight distilleries (plus Jura which is a short hop over the water) have an open day where visitors can tour the distillery, take part in other activities and get the opportunity to buy a special release limited edition bottling from each.

This year, one of our favourite Islay whiskies is doing something just a little different.  Ardbeg, which is located on the southern coast of the island, is not only launching a new whisky but is also taking the festivities to a new level with Ardbeg Day - a worldwide celebration of all things Ardbeg - on Saturday 2 June, which is also the Feis Isle open day at the distillery.  Let's start with the whisky ...

The Ardbeg Day bottling will follow the tradition of previous years and be released to the Ardbeg Committee members, plus be on sale in the network of Ardbeg Embassies around the world (of which there are now over 100) on 2 June.  If you haven't joined the Committee yet, then you can do for free by visiting www.ardbeg.com. 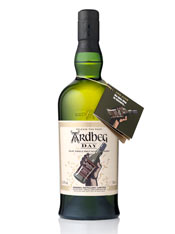 The whisky is a limited edition of 12,000 bottles and is a marriage of two different styles of Ardbeg, which have been re-racked in ex-sherry casks for the last six months.  It has been bottled at 56.7% ABV and is rumoured to be priced at around £60 a bottle.  When we get our hands on some we plan to review it, so watch this space.

Ardbeg has always been one of the industry leaders in terms of creative edge, and Ardbeg Day is no different.  The other activities centre around the Islay-limpics (- see what they've done there?) and numerous 'sporting' events are taking place around the world on 2 June.  This is happening at the distillery during the Feis Isle open day and in the 'embassies' around the world, including Australia, across Europe, Japan, New Zealand and Taiwan.  Click here to find your nearest Ardbeg Embassy.

There are prizes being awarded for taking part in the various 'sporting' events associated with the Islay-limpics when visiting the distillery or an Embassy.  However if you aren't going to Islay or don't have an Embassy near you, then there is another option ... and we can help you with it!

Ardbeg have created a cyberspace 'treasure hunt' for those unable to attend any events.  They have selected a number of leading whisky blogs and websites around the world and placed a unique Islay-limpics collector's card on each, highlighting some of the 'sporting events'.  All you have to do is locate all of the Islay-limpics collectors cards and the first 100 people to do so will win some Ardbeg prizes.

Clues as to the locations of the cards will be broadcast in the coming days through the Ardbeg Committee, Ardbeg Facebook page and Ardbeg Twitter feed.  However, we can give you the first clue right now - one of them is below!  Click on it for further instructions.  Good luck - we hope that you find the other cards and win some Ardbeg goodies .... 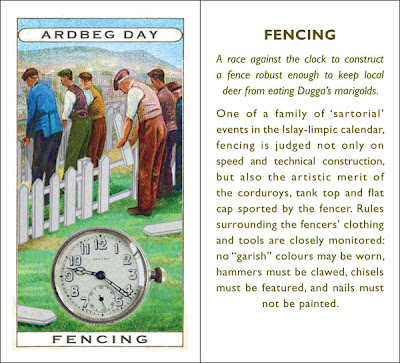 posted by Whisky For Everyone at 8:03 AM