Within Inbox we write a few lines detailing each press release/piece of news/PR event that we have received and provide links, where possible, for you to find out further information.  There are a number of new whisky releases that dominate this week, so here goes ...

Crown Royal - XR launched
The Canadian blended whiskey brand of Crown Royal have announced a new limited edition to their range - the Crown Royal XR.  It has been created by Crown Royal's Master Blender Andrew MacKay and is made using the last remaining casks from the closed LaSalle distillery. Some of these are very old, which have been carefully blended and then bottled at 40% ABV.  The blend is poignant for MacKay, as he spent his early years in the industry by working at LaSalle.

The Crown Royal brand was originally launched in 1939 to commemorate the visit of King George VI to Canada, so it seemed fitting to release this new special release in the year of the current Queen's Diamond Jubilee.  The XR will only be available for a short period of time, predominantly in the US market - it has a recommended retail price of $129.99.  For further information, please visit www.crownroyal.com. 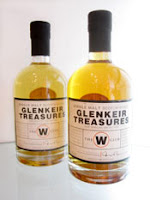 Glenkeir Treasures - Two new additions
The Whisky Shop - the UK's largest whisky retail chain - have announced the two latest releases in their Glenkeir Treasures range.  The two new additions are a Highland Park 18 years old and a Jura 21 years old.  Both are bottled at 40% ABV and will retail at £54 and £59 respectively for a 50cl bottle.  They can be purchased in any of The Whisky Shop chain's 20 stores around the UK, or via www.whiskyshop.com.

As a special promotion to celebrate the launch, they are also offering a year's free membership to The W Club - The Whisky Shop's new members club, which launched in March - with every purchase.  The W Club offers a members only website, which features tasting notes, an interactive blog, exclusive member competitions and bottlings, plus 10% off all purchases in the stores or on their website.  For more information on The W Club or to join, go to www.thewclub.co.uk. 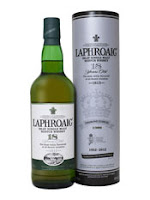 Laphroaig - Jubilee special release
The iconic Islay distillery of Laphroaig has joined the Diamond Jubilee whisky party by announcing a limited release to mark the occassion.  The distillery has strong links with the British Royal family, including having Prince Charles as a patron.  The release sees the 18 years old expression from the core range given a commemorative presentation carton, including the Queen's crest and 1/3000 bottles label being displayed.

The 18 years old Diamond Jubilee Edition is limited to just 3,000 bottles and is available only in the UK market.  It will be available from the end of May/start of June in selected specialist whisky retailers - the recommended retail price is £77.  To mark the celebrations, Laphroaig are also donating £3000 to The Queen Elizabeth Scholarship Trust. For further information, please visit www.laphroaig.com.

posted by Whisky For Everyone at 6:53 PM