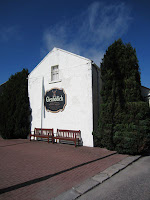 On our recent trip to the Spirit of Speyside Festival, we paid a visit to the home of one of our favourite single malt whiskies - Glenfiddich.  We were booked in on the distillery's premium tour - The Pioneers Tour.  This promised to give us an in-depth distillery tour, while offering us the opportunity to bottle our own whisky in one of their warehouses.  All of this before sampling an array of their single malts in a tutored tasting as the finale.

Glenfiddich is the most recognisable single malt brand and distillery in the world. It is the biggest selling Scotch single malt whisky across 180 countries worldwide. The distillery is located on the outskirts of the town of Dufftown in the Speyside region of Scotland.  Dufftown is the whisky capital of Speyside and is home to six distilleries that are currently in operation - Balvenie, Dufftown, Glendullan, Glenfiddich, Kininvie and Mortlach.  Three others are now silent - Convalmore, Parkmore and Pittyvaich.

The name of Glenfiddich translates as 'valley of the deer' from Gaelic and is pronounced glen-fiddick. It is Scotland's largest single malt distillery and remains one of the few remaining family owned distilleries. Glenfiddich was constructed by William Grant and his nine children in 1886 using materials from the surrounding landscape and the first spirit flowed from the stills on Christmas Day 1887. It remains owned by William Grant & Sons to this day. 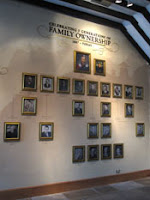 The Pioneers Tour began in the entrance to the visitors centre, under the William Grant's family tree (pictured, left).  It was the first distillery visitor centre in Scotland opening in 1969 and has grown to cater for 77,000 visitors in 2011.  We were greeted by Bert Macor, Senior Guide at Glenfiddich, who led us through to a film theatre.  Here we watched a short but emotive video about the history of the Glenfiddich distillery and the historical involvement of the Grant family in its construction and operation.

Bert then carried on the introduction by filling in some of the historical gaps that were not covered in the film, followed by hitting us with some of the staggering statistics of this huge distillery.  For example, at Glenfiddich they use around 90 tonnes of malted barley each day - this results in 12 million litres of spirit being produced and put in to casks each year. 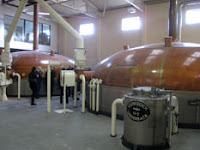 The tour moved inside the distillery into the mash room.  This is where the malted barley grist is mixed with warm water so as to dissolve the soluble sugars needed for fermentation.  This process takes place in two of the biggest mash tuns that we have seen on any distillery visit to date.  These copper-domed tuns dwarf us and can hold 11,000 tonnes of mash each.  Between them they complete four mashes a day adding up to 56 a week in total.  They also have a viewing window in the side and we witnessed a new batch of water being added to the mash and slowly stirred. 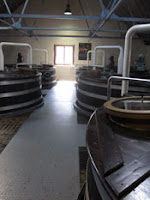 Moving upstairs, we entered the series of rooms where the fermentation takes place.  It is here that we begin to fully see the physically large scale of Glenfiddich - there are 24 tanks, called washbacks, each of which hold 50,000 litres of liquid.  The wort comes from the mash tun, has yeast added and is then left to ferment for 72 hours.  Here the sugars in the wort are converted to alcohol and this new liquid is called wash.  Each washback is made of wood from Douglas fir trees. 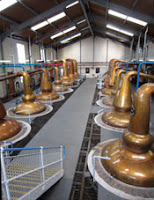 Our next stop is one of the two still houses.  This is home to five large wash stills, where the first distillation takes place, and 10 smaller spirit stills, which complete the second part of distillation process.  The second still house is equipped with five wash stills and eight spirit stills.  The place has a real sense of awe about it, especially when you start to comprehend the 12 million litres of spirit that is annually produced, and the noise from directly fired stills is immense.  When standing next to the spirit stills (seen in the foreground of the photo) what is surprising is how small they are - you could almost reach up and touch the lyne arm, if you wanted to.  Well, if it wasn't boiling hot ... 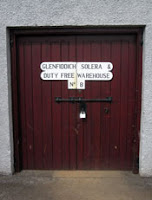 Bert then led us across the courtyard, down a narrow path and over a bridge.  Our destination was to be Warehouse No.8 - one of the old dunnage-style warehouses on the site and home to the famous Solera Vat, which is used in the maturation of the award winning 15 year old expression of Glenfiddich.  In total, there are 44 warehouses which are used for maturing whiskies from Glenfiddich, Balvenie and Kinivie.  There is a staggering 120 million litres of spirit maturing in these warehouses. 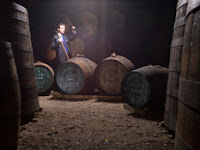 After a quick look around the warehouse and an explanation from Bert about the impressively large Solera Vat (it holds 37,000 litres of whisky and is never completely emptied, which gives consistency to the 15 years old expression), we move on to the main event - the opportunity to bottle our own 20cl from one of four casks selected by Glenfiddich's Malt Master Brian Kinsman (pictured, left).  You will only get the chance to do this on The Pioneers Tour - Brian has selected two ex-bourbon casks, one first-fill and one second-fill, and two ex-sherry casks, one first-fill and one second-fill.

After a quick sniff of each cask, we all chose the one we wanted to bottle. Using the traditional dog and funnel we then get to pull our own measure of whisky and fill our own bottles.  This is a great experience to take part in and felt special and unique, especially when standing in such peaceful surroundings. Karen chose the first-fill sherry cask from 1995 and Matt chose the first-fill bourbon cask from 1991 - this proved even more special, as it turned out to be the first bottle drawn from this new cask. 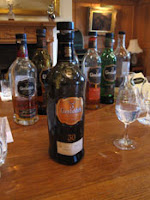 The grand finale of The Pioneers Tour took place in the luxurious VIP Suite surrounded by photos of the Grant family.  Firstly, we hand wrote the labels for our 20cl bottles and entered our details in the cask ledger book.  This ceremony is followed by a tutored whisky tasting with Bert, who after allowing us a sniff and sip of Glenfiddich's new make spirit, took us through the 12 years old, 14 years old Rich Oak, 15 years old, 18 years old, 21 years old Gran Reserva and 30 years old expressions.

The Pioneers Tour left us with plenty of memories to reflect on.  Firstly, how could three and a half hours go so quickly? Secondly and most importantly, is the sense of tradition at the distillery.  We had wrongly imagined that Glenfiddich was going to be a huge industrial factory - this is not the case and you see this at every point of the tour.  Yes, it is huge but everything feels traditional and is simply replicated to a scale that meets their vast needs, be it the mash tuns, washbacks, stills or warehouses.  Every employee that we spoke to seemed to proudly enjoy working there and felt that they had a direct link to the Grant family in some way.  Long may that feeling continue.

As we were going around Glenfiddich, we took a few clips of video so that we could bring you some of the sights and sounds of the distillery.   We hope that you enjoy our video - don't worry it's not three and a half hours long, just four minutes ...

Glenfiddich also runs two alternative distillery tours - the Classic Tour and the Explorers Tour.  The Classic Tour is free of charge and takes in a tour around the distillery, finishing with a tasting of three expressions from the Glenfiddich single malt range.  This runs about every 20-30 minutes.

The Explorers Tour costs £10 per head and covers the distillery in more depth, taking in the famous Solera Warehouse No.8 and finishing with a tasting of four whiskies in the William Grant's VIP Suite.  Booking is essential for the Explorers and Pioneers tours - email glenfiddichbookings@wgrant.com or phone 01340-820373.
posted by Whisky For Everyone at 5:40 PM

Nice review. A good memory since I did the distillery visit with you guys.