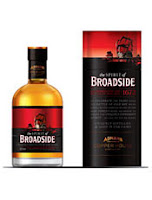 The Spirit of Broadside is a new product that has been released by Adnams, the British brewer and distiller.  Adnams is located in Southwold on the eastern coast of England, between the towns of Felixstowe and Lowestoft, and they have been making beer there for over 100 years.  They produce a range of highly awarded and popular cask and bottled beers, plus the also own a chain of pubs, hotels and wine shops.  One of their most popular beers is called Broadside, and it is the star of this blog post.

Adnams have been brewing Broadside for the last 40 years.  It was originally released to commemorate the 300th anniversary of the Battle of Sole Bay - a huge naval battle in the Third Anglo-Dutch War involving 170 ships and saw both sides claim victory - which took place off the coast of Southwold in 1682.  Broadside has now become one of their best sellers and to commemorate its 40th anniversary, Adnams have come up with something special.  They have distilled some of the Broadside beer to produce a unique 'eau de vie style' of drink, which they have named Spirit of Broadside.

In November 2010 Adnams completed work on a new distillery, which has been built next to their famous brewery.  The Copper House Distillery has been producing gin, vodka and whisky in the 18 months to date.  The gin and vodka were released immediately and have already started picking up major awards. The whisky has been laid down to mature and is planned for bottling when it reaches three years of age.  The Spirit of Broadside offers a one year old sneak preview of this and has been matured in heavily charred Russian oak casks, then bottled at 43% ABV.

Our tasting notes
The colour is deep for a youthful spirit and is dark golden yellow with a hint of amber. The nose is very fresh and full of vibrant aromas. There is an initial blast of vanilla, crisp green fruit (think of pear and apple) and plenty of freshly sawn wood. This vibrancy softens slightly with time in the glass and it begins to reveal some sweeter notes, especially honey and toffee. Underneath there is an interesting, slightly dusty and savoury note of dried grass or straw.

On the palate, this again feels very fresh and seems to follow a similar path to that of the nose.  The intense oak spice grabs your taste buds first and gives a drying, mouthwatering sensation.  After a few seconds this subsides to allow the softer and sweeter notes through - there are plenty of vanilla notes, plus some honey, tangy green fruits (the pears and apples again, although this time this note comes across more like pear or apple boiled sweets) and a hint of toasted marshmallows. The slightly dusty, savoury note is again in the background, although this feels a bit more vegetal now, and this adds a pleasant depth and bitterness.

The finish is a little short but gives a pleasant mix of sweet vanilla, honey and the slighty tart green fruits, along with plenty of gripping wood spices.  These spices give the finish a delicious dryness especially towards the end, as does a hint of pepper-like heat.

What's the verdict?
It is always good to try the first new product from a new distillery, especially one that already has a great reputation from another field of the drinks industry.  Adnams have not disappointed with the Spirit of Broadside, which shows plenty of encouraging characteristics for a spirit which has only had a year of maturation.

It is not one for everyday drinking, due to its vibrant, spicy and drying nature, but it is worth trying.  It is also reasonably priced against other similar products from other distilleries.  We can't wait to see what happens after two more years in a cask, especially as these early signs are so good.