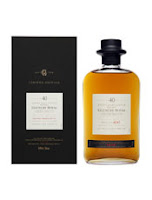 We always get slightly excited at Whisky For Everyone when a whisky sample arrives in the post from a distillery that we have never tried before.  This is heightened further when the distillery is closed and no longer in existence.  Glenury Royal fits the bill on both counts.  Recent releases of single malt from this distillery have been scarce and this is one of the oldest ever expressions to have been bottled from the remaining stocks.

The Glenury Royal 40 years old formed part of the Diageo Special Releases 2011 series.  We were lucky enough to sample nearly all of last year's releases at the launch event last October, but not this elusive beast.  Now we finally get the chance to try it and tick off another distillery from our list.  There are just 1,404 bottles, each of which is individually numbered, is bottled at the natural cask strength of 59.4% ABV and it has been maturing in the same re-fill ex-bourbon casks since 1970. It has a recommended price of £525 and is available through specialist whisky retailers.

The Glenury Royal distillery, or simply Glenury as it is sometimes known, was founded in 1825 by Robert Barclay.  It was located in the east Highland town of Stonehaven, which lies to the south of the city of Aberdeen.  The distillery was damaged by fire just a few weeks after opening, suffered periods of prolonged closure and had numerous changes of ownership over the years.  It closed for good in 1985 and the buildings were demolished in the early 1990s, to be replaced by a modern housing development.  Only the distillery's chimney remains.  Most of the remaining stocks belong to Diageo, the last owner of Glenury Royal.

Our tasting notes
The colour is a deep golden yellow and the nose is packed full of sensual aromas that jump out of the glass - there is a wonderful and expressive mix of warming wood spice (especially nutmeg), honey, butterscotch, dried apple, vanilla, polished oak furniture and hints of candied lemons and milk chocolate.

On the palate, this is incredibly vibrant for a whisky of this age.  The high alcohol level packs a punch, exaggerating the flavours present and letting the whisky grip the taste buds.  It feels a bit oily in the mouth, but quite zesty (the candied lemons again) at the same time.  There are initial honey, vanilla and brown sugar notes which soon become joined by some surprisingly fresh, crisp green fruits (think of pear and apple) and a hint of dried tropical fruit, especially mango.  The delicious combination is heightened by plenty of drying wood spices - imagine cinnamon, nutmeg and cedarwood - and a hint of cocoa powder.

The finish is long and becomes increasingly dry, spicy and mouth watering with time.  The initial honey/toffee-like sweetness quickly subsides to reveal the gripping oaky spices and a peppery heat, which seems to take an age to fade.  With water, everything becomes softer and creamier with the vanilla and honey notes coming more to the fore.  Thankfully some of the wood spices and the bitter lemon note survive also.

What's the verdict?
This is a lovely single malt and one that feels like a real treat because of the general rarity of Glenury Royal whiskies.  It sets your taste buds alive with its rich, spicy and sweet flavours, which are intensified by the natural cask strength.  Its a stunner of a whisky and not too heftily priced compared to some of its 40 year old competitors.  It may be the first Glenury Royal whisky that we have ever tasted, but we hope that it is not the last.