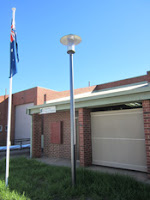 During our recent trip to Australia we made the pleasurable discovery of a little known distillery based in Adelaide, South Australia - Southern Coast Distillers.

Southern Coast Distillers are a small group of friends who have chosen to devote their spare time and (being entirely self-funded) spare cash making whisky. The company was formed in 2004 by three friends (Ian Schmidt, Victor Orlow and Tony Fitzgerald) and their partners with the intention of creating the unique vision of a South Australian single malt distillery. It is certainly not your average whisky distillery.

Distillation started in January 2005 with a tiny 80 litre still that was nick-named Monty as it looked somewhat like the famous cartoon character ‘Monty Burns’ from The Simpsons. The first cask to be filled was an equally tiny 50 litres. This should start to give an idea that this distillery is a little different and keen to try new ideas and set new standards. Since these humble starts the still has been replaced by a bigger 600 litre still nick-named ‘Homer’ in reference to its large size (well, compared to Monty) and various casks have been used by way of experiment. It should also be noted that both of the stills are hand-made by the distillers.

Our visit to this less than typical distillery was evident when we arrived one sunny afternoon at a flagpole factory. Like any avid whisky lovers, we are used to the often picture postcard distilleries in Scotland and this could not have been more different. We were here to meet Ian Schmidt one of the driving forces of Southern Coast – a man who is passionate about whisky and wanted to create something unique and of the highest possible quality - whisky that he would want to drink.

Ian explains to us that they only make whisky for one day in every fortnight and the remainder of the time this is in fact a flagpole factory. When we asked Ian what made him start making whisky he answered that he had been making flagpoles for a lot of years and was a bit bored of it. He thought making whisky would be more fun and confirms that it certainly has been. 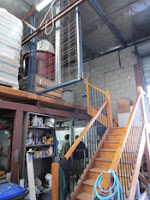 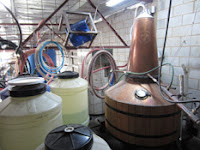 The ‘distillery’ is on a caged off raised platform in this open factory space. It consists of Homer, a large tank (where the fermentation takes place) next to another large tank (where the mashing takes place), a few bags of malted barley, the odd liquid filled barrel and a few small French and American oak casks made in Tasmanian on the floor and on a shelf to the side a collection of bottles of their whisky and poor old Monty tucked in the corner. We were assured Monty was still in action from time to time however. It is all crammed into a space no bigger than the average kitchen. The other unavoidable fact is that despite the still not being in use and our visit occurring in the cooling autumn time, it was swelteringly hot up here.

There is nothing reminiscent of the traditional Scottish distillery here. It would be completely understandable at this time to think we have just discovered a madman who was making some crazy moonshine and that we should leave without making any sudden movements. We had heard, however, that this was whisky to be appreciated so we stuck around and tried a little of the whiskies released to date.

Southern Coast releases small batches of whisky as and when they reach a suitable flavour profile. Ian assures us that any whisky that does not meet a high standard will simply not be released. These whiskies reach maturity after roughly three to five years due to the warm climate in Adelaide. Anything longer than this would show excessive characteristics of wood plus the angels share would leave very little in the cask. These climates are closer to those of Bourbon producing regions of America than Scotland. Southern Coast is, however, determined to produce whiskies with the complexity of Scotch single malt so the climate certainly does create its own challenge.

While we were with Ian we tried small samples of Batches 1, 3,4 and 5. Each batch is limited to less than 180 bottles and each has its own unique flavour profile. See the website for detailed tasting note of these whiskies plus the sold out Batch 2. (southerncoastdistillers.com.au/products/whisky). Ian also kindly provided us with a small sample of Batch 5 to take home and try in a somewhat cooler climate. 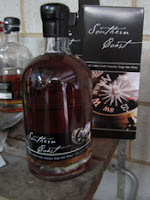 Our tasting notes - Southern Coast Distillers Batch 5
This particular whisky was matured for a little over three years in a re-made and re-furbished, heavily toasted sherry cask made from American oak. It has an ABV of 46% and a yellow gold colour. On the nose there is bags of honey with vanilla and caramel/toffee/butterscotch sweetness tempered by bitter orange, oak/cinnamon bark woodiness and some oiliness. The creamy palate is filled with orange oils, leathery savouriness, cereals, eucalypt, liquorice and woody dryness with the sweetness coming through as burnt caramel, honey and vanilla. There is a long drying finish of spices, woodiness and that bitter orange. It is fresh and uplifting and leaves your mouth watering.

Our conclusion
Any whisky released from Southern Coast Distillers will be difficult to get a hold of unless you happen to live in Adelaide (even then you will need to go to East End Cellars or know one of the handful of bars who stock them). The good news is that they sell on their website and will deliver to anywhere in Australia, and this IS good news. Their whiskies stand up to the test and are impressively complex in flavour with each whisky having its own voice that is worth listening to.

Find out more about the whiskies and the distiller's philosophy at southerncoastdistillers.com.au. This is a distillery that certainly does not play by the rules but if this is what the new kids on the block are producing as a start, keep an eye on them.
posted by Karen at 8:33 PM

nice posting.. thanks for sharing.