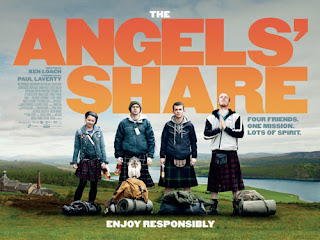 At Whisky For Everyone we don't do movie reviews.  That's not because we don't like movies, but because there just aren't that many movies about whisky.  The classic Whisky Galore springs to mind, but that was made in 1949.  That's it apart from a few prominent cameos, such as the futuristic bottle of Johnnie Walker Black Label in Bladerunner or the sublime 'Suntory Time' advert in Lost In Translation.  That is until now, as today sees the UK premiere in Glasgow of bittersweet comedy The Angel's Share, a new film by acclaimed director Ken Loach.

The movie has been written by Paul Laverty, whose other movie works include Looking For Eric, and is centred around a group of delinquents sentenced to community service for various crimes that they have committed.  The main character (Robbie, played by Paul Brannigan) has been given one last chance to rectify his ways after a series of brutal attacks on people.  Something has to change for him, otherwise he will be in jail for a long period and miss his newly born son growing up.

Friendships form within the group and the community service leader (Harry, played by John Henshaw) takes the group, and in particular Robbie, under his wing.  It is when Harry opens an old bottle of single malt whisky and shares it with Robbie to celebrate the birth of his son that proves to be the turning point.  In a way that many whisky fans will relate to (including us), Robbie realises there is more to whisky than he ever thought imaginable.

The story goes on from there with the bond within the main group of four characters, and the characters themselves, developing.  Whisky is the vehicle for this taking place but it is really the portrayal of these characters that is the story here.  The message that you can take your last chance and make something of yourself comes through loud and clear.  All of the community service characters are not particularly likeable at the beginning, which contains some gritty, hard hitting scenes around Glasgow, but turn themselves around by the end.

The movie is beautifully shot with some stunning locations used in the Highlands (and some not so stunning ones on Glasgow housing estates!), including the picturesque Balblair distillery.  Numerous scenes are shot in and around the distillery in the second half of the movie, and it is bound to become a hotspot location for visitors and movie fans alike.  There are also a few Scottish stereotypes that put in an appearance, such as kilts, Irn Bru and The Proclaimers on the soundtrack!

The movie has already picked up the coveted Jury Prize at the recent Cannes Film Festival and goes on general release in the UK on 1 June.  A worldwide release will follow shortly afterwards.  In the mean time, sit back and enjoy the trailer ...

posted by Whisky For Everyone at 11:17 AM

HOW TO INSTALL PHILIPPINES TV ON IPHONE AND IPOD TOUCH? CLICK HERE

or visit Android and Apple APPS