Mackmyra was born after a (probably quite messy) evening during a skiing trip in 1999 in which eight friends each brought along a bottle of malt whisky. As the whisky flowed, conversation turned to how whisky was made, after few more drams the conversation had moved on to why, given the natural resources available, there was no malt whisky distillery in Sweden. By the end of the night they had decided that they should found a distillery. Unlike most of us who come up with crazy ideas during alcohol based evenings, these guys were serious, they had the courage of their convictions and the determination to become pioneers (and more importantly, they had remembered what they were talking about the night before).

By 2002, Sweden’s first whisky distillery was completed, renting an old iron mill in the town of Gävle a few hours north of Stockholm. Its first whiskies saw queues of people line up outside liqueur stores in Sweden to buy a bottle. Since then Mackymra have gone from strength to strength and they recently built a new £5 million energy efficient, gravity fed distillery, taking the capacity up to 2 million litres of spirit per year. The new distillery represents the first stage in a planned 10 year, £50 million investment in the construction of a Whisky Village (Whiskyby in Swedish) where there will be buildings dedicated to explaining each stage of the whisky making process and overnight accommodation for visitors.

The First Edition was Mackmyra’s first regular release following the limited edition Preludium Series that everyone in Sweden went mental for and queued down the street in order to nab a bottle. It’s bottled at 46.1% and retails for around £43 from specialist shops. Ninety-five percent of the whisky is matured in bourbon casks with the other five per cent matured in Swedish oak. Forty-five percent of the whisky then undergoes additional maturation in 100 litre casks which are made by the only remaining cooper in Sweden. The Special 03 is matured in teeny 30 litre casks specially made from ex bourbon and sherry casks and Swedish oak and is bottled at 48.2%. The Special 04 is a bourbon cask matured whisky finished in 30 litre casks and bottled at 53%. Both the Special 03 and 04 sell for around £65 from specialists. 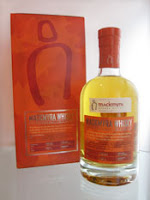 Our tasting notes – First Edition
What’s initially very striking is the fruitiness and sweetness that hits you upon first nosing with aromas of pear drops, apple pie and custard. The nose gradually becomes woody with aromas of freshly sawn wood and sawdust. There’s still a sweet fruitiness there as well though, akin to stewed apples, strawberries and cream boiled sweets and cherries. More savoury aromas also pop up after a while which reminds me of alka seltzer and porridge oats. On the palate there’s a sweetness at first with blueberries and vanilla. Then it gets quite gristy and bitter - first with dark chocolate as the palate changes from sweet to bitter, and then lots of oakiness. There’s also some alka seltzer, and a hint of bitter fruitiness which reminds me of blackberries. All in all - a big forceful dram, which shows its young age with quite a lot of oak but there's enough fruitiness to offer some balance. 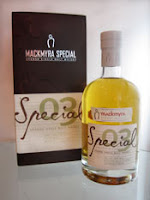 Our tasting notes – Special 03
A mix of sweet and savoury on the nose with mashed potatoes, beer; chocolate limes, toffee and coco powder. On the palate there’s a sort of mentholated/boiled sweet thing going on and also wine gums. This one is quite sweet with tangy apple tart and strawberry ice cream, but this is all balanced by a nice oakiness throughout with blueberries on the finish. A very nice, compact, tasty dram. 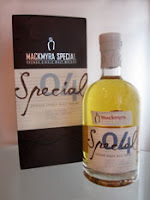 Our tasting notes – Special 04
Lots of wood on the nose at first, more of the earthy damp sort of woodiness like forest floors, log piles and mulch. There’s also a sort of conifer/Christmas tree/pine-like note as well. After a while there are lemons, honeysuckle, mint humbugs and tinned peaches, and a slight bourbon note. Gradually it gets more grainy and cardboardy with a bit of time in the glass. On the palate there’s lemons and lemongrass – it’s lemony. Although that sounds like it’s super citrusy weirdly it’s not. There’s vanilla as well and cake mix along with some bitter sweet blackberries. There’s horseradish and black pepper mid palate followed by a short grassy finish. Another tasty compact dram but the short finish lets it down a little and the hot spiciness is a little forceful.

What’s the verdict?
The First Edition wins best nose, the 03 best palate and the 04 is somewhere in between. All very nice whiskies which although I don’t think are quite there yet (especially considering the price), certainly show that the whisky coming out of Mackmyra has a lot of promise. It’s going to be good fun seeing how the whisky progresses over the next few years.
posted by Matt Tilbury at 11:58 PM

Ah, how wonderful it is to emerge from a frustrating exam period and return to Whisky4Everyone. A superb post, from a distillery whose output I have yet to come across but badly want to.

Once again, the detail surrounding the expressions you have tasted here, and your subsequent thoughts upon tasting them, places the reader squarely in the picture.
Thanks.

I tried the first edition in Stockholm earlier this year. The 'pear drops, apple pie and custard' description is right, though I found the whole thing to be a bit too chemical for my taste.