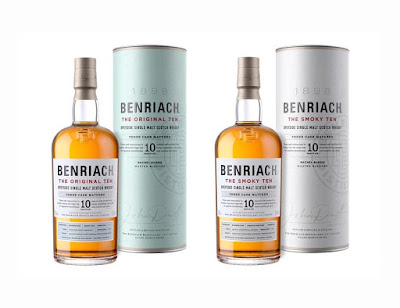 These two whiskies form the entry point in to the newly revamped core range of single malts from the Speyside distillery of Benriach. The new range is designed to showcase Benriach's unique eclectic range of casks from around the world, which come from close to 20 different origins, and the three different spirit styles that are produced their - classic Speyside, peated Speyside (which is only produced for 5-6 weeks each year) and triple distilled (produced for just 1-2 weeks each year). The range has been entirely created by Dr. Rachel Barrie, the Master Blender for Benriach.
In addition to these two 10 year olds, one consisting of classic spirit and one of peated spirit, the range also features two 12 year old expressions - The Twelve and The Smoky Twelve - which again consist of classic spirit and peated spirit respectively. Then at the higher end there are three age statements released at 21, 25 and 30 years of age. All feature a marriage of at least three cask types, and in some cases four.
All the whiskies are released in new packaging, which draws influence from the first ever official bottling of Benriach that was released in 1994, and will be gradually introduced to world markets from mid-September. The Benriach travel retail Cask Editions - the Triple Distilled Ten, Quarter Cask and Smoky Quarter Cask - will also be repackaged with the whiskies remaining the same.
The Benriach distillery was founded in 1898 by John Duff and is located just south of Elgin. Following a long period of closure Benriach re-opened in the mid-1960s and became well known for producing high quality single malt to be used in blending. The practice of producing peated malt began in 1972 and has been maintained each year since. This short period is called the 'smoke season'. Triple distillation was first practiced in the late-1990s. The current owners are Brown-Forman and the annual capacity is just over one million litres.
Our tasting notes 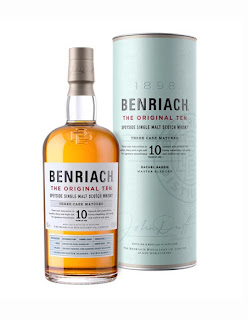 Benriach The Original Ten
43% ABV /  £38
Bourbon / Oloroso sherry / virgin oak casks
The colour is golden yellow and the nose is packed full of green apple and crisp pear aromas. These leap out of the glass and begin to mingle with further aromas of fudge, toffee and honeycomb. Then come hints of sultana and candied orange peel with a pinch of warming oak spice and vanilla. Late cinnamon bark adds further depth.
On the palate this whisky feels extremely soft and creamy. The fudge and toffee from the nose drive the flavour forwards with the aid of a note of butterscotch. The apple and pear is never far away and becomes more influencial with time - it feels more like stewed apple and poached pear now, rather than the fresher fruit on the nose. Underneath are honey and golden syrup with baking spices and dried fruits coming though later - think of cinnamon, all-spice, sultana and candied orange peel. A background earthy savoury note rounds things off nicely.
The finish is of decent length and remains soft and creamy. The sweetness and fruity elements slowly fade to leave warming baking and oak spices to linger and give a drying freshness. 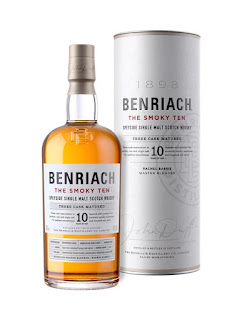 Benriach The Smoky Ten
46% ABV / £42
Bourbon / virgin oak / Jamaican rum casks
The colour is pale gold and the nose has a rich and earthy set of aromas to it. Sweet, gentle peat smoke licks around caramelised tropical fruits (think of pineapple, mango and a hint of peach) and crisp green apple and pear. Hints of honey and golden syrup add further richness and sweetness, and are joined later by a pinch of baking spice and fresh oak.
On the palate this whisky feels immediately sweet, viscous and slightly oily. Golden syrup and honey notes combine with robust cereals and the crisp green apples and pears from the nose. Then come the tropical and exotic fruits - these have a caramelised and barbequed feel to them. Pineapple and apricot notes mix with others of brown sugar containing a pinch of cinnamon. The earthy, sweet and gentle peat is never far away and balances the fruity notes well. A twist of lemon zest and some late baking spice, especially cinnamon and gingerbread, give even further depth and complexity.
The finish is long with the sweetness and caramelised tropicals holding well. Ultimately it is the soft gentle smoke that wins though and lingers longest. The three elements seem to push each other on to last longer than if they were on their own.
What's the verdict?
These are two fabulous whiskies to kick of the new Benriach core range. Both are improvements on their previous incarnations - the slightly bland 10 years old and cult classic Curiositas 10 years old. The Original Ten is incredibly fresh on the nose, like being in an orchard, and then so creamy and soft on the palate but full of flavour. The Smoky Ten is one of the best peated Speysides you will try and the revised cask combination elongates the finish and is a revelation.
Both are also well priced for the quality they present. Few distilleries offer two such different whiskies with the same age statement - The Original Ten is a classic example of what many expect a Speyside single malt to be, whilst The Smoky Ten offers up Speyside with a peaty twist. Check them out, they are both well worth it.
posted by Matt C at 5:45 PM