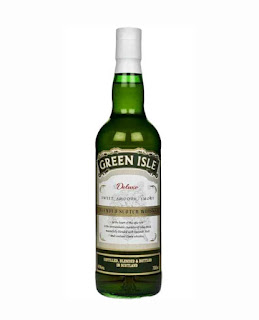 The Green Isle is a blended Scotch whisky that sits as an entry point to The Character of Islay range. This range includes the single malts of Aerolite Lyndsay 10 years old, Grace Île 25 years old and The Legend of Fiona Macleod 33 years old. At its core are a number of single malts from Islay distilleries and these are blended together with a Speyside malt and a Lowland single grain whisky. The resulting whisky takes its name from the novel The Green Isle of the Great Deep by Neil Gunn, where he describes Islay as being 'an island off the west coast of Scotland only accessible via a whirlpool'. The whirlpool in question is the world famous Corryvreckan.
The Green Isle blended Scotch whisky is bottled at 40% ABV and should cost just under £30. It is available in selected specialist stores and online retailers.
Our tasting notes
The colour is golden yellow and the nose has an immediate earthy and malty quality. Aromas of damp moss and charcoal rise from the glass, along with bittersweet cereals and oat biscuit. Underneath are further aromas of butterscotch, toffee and vanilla plus a hint of stewed apple, cinnamon and cocoa.
On the palate this whisky has an initial softness and creaminess that is often missing from Islay whiskies. This is led by notes of vanilla and toffee, but does slowly fade as the more traditional peat smoke elements come to the fore. These add a savoury and peppery feel to the whisky. Stewed apple and poached pears covered in runny honey balance the smoke a little, as does a hint of milk chocolate. The peat smoke evolves to demonstrate a mix of damp earth and charcoal ash in addition to the peppery spices. This is underpinned by the robust malted cereals and this gives a biscuit-like quality as found on the nose. Late pinches of cinnamon, cocoa and ground ginger round things off very nicely.
The finish is of decent length and increasingly drying. The cereals become more bitter and the peat smoke more ashy. The sweet and fruity notes fade and this allows the cinnamon, ginger and pepper spices to come through more forcefully. This only adds to the drying feel.
What's the verdict?
This is a good example of a blended Islay whisky. We like that it is released at 40% ABV as it makes it nice and approachable. It would be especially good as an introduction to the peat smoke style for someone that has never tried it or as an every day sipper for someone more familiar with the genre. It shows all the characteristics expected but without going too far. The Green Isle is well constructed and offers plenty for the money. Delicious.
posted by Matt C at 12:49 PM