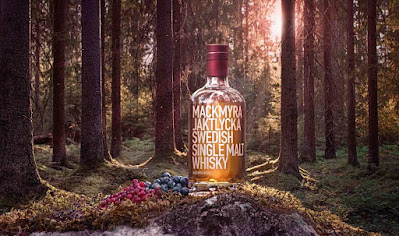 This is the latest single malt in the seasonal limited edition series from Swedish distillery Mackmyra. Bottlings in the series are released each Spring and Autumn and this Autumn's whisky is named Jaktlycka, meaning 'hunting luck'. The whisky is inspired by the ancient forests that surround the distillery and come to life with fruit and berries each Autumn, and are popular hunting grounds for Swedes. Jaktlycka has been matured in American oak and Swedish oak casks that have previously held blueberry and lingonberry wines from the Grythyttan winery in Sweden.
Mackmyra was founded in 1999 by eight friends who decided to build Sweden's first single malt distillery whilst on a skiing trip. The original distillery was replaced in 2012 by a larger new eco-friendly distillery in the town of Gävle. This state-of-the-art distillery is 37 metres high, cost an estimated £50 million to build and uses gravity during production - simplistically, malted barley is fed in the top and new make spirit comes out of the bottom. The annual production capacity is approximately 525,000 litres.

"Jaktlycka is a warm and soft whisky filled with treasures from the forests. The berries and wonderfully spicy Swedish oak generate a fantastic flavour that embodies the Swedish forest and Autumn time."
Angela D'Orazio - Master Blender at Mackmyra.

Mackmyra Jaktlycka follows Grönt Te, the Spring offering influenced by Japanese green tea, and is bottled at 46.1% ABV. It is non chill-filtered and of natural colour. It is available now from the Mackmyra distillery, via the Mackmyra website and specialist retailers in selected markets including Germany, Sweden and the UK. A bottle will cost £59/ $79 US.
Our tasting notes
The colour is deep gold with a deep red tint and the nose is full of fruity and spicy aromas. First come aromas of raisin and red berries - this particular notes is most reminiscent of dried raspberry and cranberry. Then comes vanilla and golden syrup with a pinch of brown sugar and hint of peach. Underneath is that spice mentioned earlier - think of pencil shavings, cinnamon, all-spice and a hint of white pepper.
On the palate this whisky hits you first with that warming and woody spice - there are plenty of notes of fresh oak including that pencil shaving feel from the nose, plus influential baking spices such as cinnamon and all-spice. Add in a hint of gingerbread and this gives further warmth. Just as the spices and wood threaten to dominate, some lovely sweetness develops. Notes of golden syrup, honey and vanilla mingle with dried red berries - especially cranberry and lingonberry - and a good dollop of apricot jam, plus a hint of ripe peach in the background. Each element seems to compliment and work in tandom with each other superbly.
The finish is of decent length. The sweet notes fade first, followed by the red fruit and finally the suggestion of peach and apricot. This leaves the warming and woody spices to take over and this gives the finish a pleasant dryness and heat.
What's the verdict?
This is another lovely seasonal whisky from Mackmyra and one that shows their controlled experimentation and innovation in a great light. Who else uses blueberry and lingonberry wine casks to mature whisky in? The combination of sweet, fruit and spice is delicious and they work so well together. It is fresh and vibrant, yet sweet and almost juicy with a pleasing viscous texture. Delicious and worth searching a bottle out before it sells out.
posted by Matt C at 4:30 PM