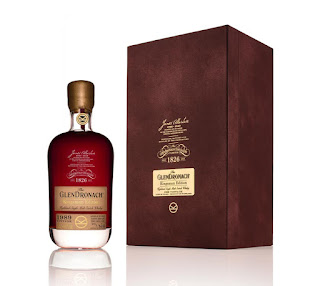 This whisky is the second release of the limited edition and super-premium Kingsman single malt from the east Highland distillery of Glendronach. The Glendronach Kingsman Edition 1989 Vintage has been bottled at 29 years of age and as with the first edition, which sold out rapidly, it is released in collaboration with The Kingsman movie franchise. The latest film in the series, The King's Man, is released by 20th Century Fox and MARV this Autumn.

The whisky has been crafted by Dr. Rachel Barrie, the Master Blender at Glendronach, using just six ex-Oloroso sherry casks sourced from Jerez in Spain and all distilled and filled in 1989. These were then finished in ex-Pedro Ximenez sherry casks before being married together.

Barrie worked in collaboration with Matthew Vaughn, the director of the Kingsman franchise, who is a self professed life-long fan of Glendronach. There are just 3,052 bottles available and each has been hand labelled, numbered and wax sealed. Each is also adorned with bespoke Kingsman insignia.

The Glendronach distillery was founded in 1826 by James Allardice and is located in the Aberdeenshire countryside close to Huntly. The majority of the present buildings date from 1850 when the distillery was rebuilt following a devastating fire and it was the last in Scotland to use stills directly fired by coal - this practice only finished in 2005. The distillery is known for its use of high quality ex-sherry casks and is currently owned by Brown-Forman. The annual production is around 1.3 million litres.

The Glendronach Kingsman Edition 1989 Vintage is bottled at the natural cask strength of 50.1% ABV and is non chill-filtered and of natural colour. It is available now from specialist whisky retailers worldwide and will cost £775/ $1,035 US per bottle.

The colour is a deep amber brown and the nose is immediately rich, nutty and earthy.  Dark dried fruits, especially raisins and figs, mingle with robust wood spices - think of cinnamon bark, mace, cedarwood and sandalwood. There are also heavy aromas of dark chocolate and dried orange and lime peel. Underneath is a hint of barley, yeast and jammy blackberry compote.

On the palate this whisky is robust, viscous and rich. Heavy wood notes combine with dark dried fruit notes - imagine raisins, figs, currants and a hint of over ripe tropicals - to give a syrupy and mouth coating feel. These wood notes (again the cinnamon, cedarwood and sandalwood from the nose) are then joined by warming baking spices (think of all-spice, mace and a pinch of ground clove) and a distinct bitter nuttiness. This is most reminiscent of almond skins, walnut and brazil nut. These characteristics are all underpinned with further notes of molasses, treacle, orange oil and high cocoa dark chocolate. It is deep, complex and full-on. With time an underlying maltiness also comes through.

The finish is extremely long and warming. The sweeter elements, particularly the dried fruits and molasses notes, fade to allow the bitter, woody, nutty and spicy characteristics the opportunity to shine. These linger for an age with a pleasant hint of orange oil, dark chocolate and cocoa coming through later on.

This is a classic example of how good old and carefully managed ex-sherry cask whiskies can be. Younger examples are often sweet and sugary but here the Glendronach Kingsman has evolved these elements in to a savoury and complex set of characteristics that can only come with advanced age.

This is what Glendronach is all about and what they do best - it is a robust and brooding single malt and one definitely for the fans of heavily sherry influenced whiskies. This whisky is made for just such people and ones with deep-ish pockets at that.

That said, there are other famous sherry cask matured distilleries that release malts of a similar age for significantly higher prices. Others are also lower to be fair, but it has to be remembered that this is a limited edition. You get what you pay for at the end of the day and if you want to own older versions of premium distilleries such as Glendronach then you have to pay for it, whether it is a movie tie-in or not.