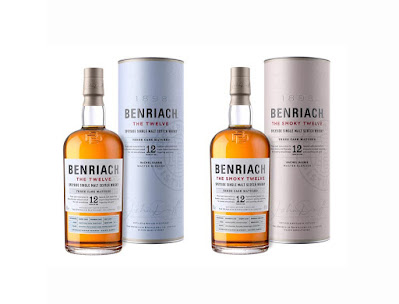 These two whiskies form part of the newly revamped core range of single malts from the Speyside distillery of Benriach. The new range is designed to showcase Benriach's unique eclectic range of casks from around the world, which come from close to 20 different origins, and the three different spirit styles that are produced their - classic Speyside, peated Speyside (which is only produced for 5-6 weeks each year) and triple distilled (produced for just 1-2 weeks each year). The range has been entirely created by Dr. Rachel Barrie, the Master Blender for Benriach.

In addition to these two 12 year olds, one consisting of classic spirit and one of peated spirit, the range also features two entrt level 10 year old expressions - The Original Ten and The Smoky Ten - which again consist of classic spirit and peated spirit respectively. Then at the higher end there are three age statements released at 21, 25 and 30 years of age. All feature a marriage of at least three cask types, and in some cases four.

All the whiskies are released in new packaging, which draws influence from the first ever official bottling of Benriach that was released in 1994, and will be gradually introduced to world markets from now on. The Benriach travel retail Cask Editions - the Triple Distilled Ten, Quarter Cask and Smoky Quarter Cask - will also be repackaged with the whiskies remaining the same.Further limited editions are due to be announced later this year and early next.

The Benriach distillery was founded in 1898 by John Duff and is located just south of Elgin. Following a long period of closure Benriach re-opened in the mid-1960s and became well known for producing high quality single malt to be used in blending. The practice of producing peated malt began in 1972 and has been maintained each year since. This short period is called the 'smoke season'. Triple distillation was first practiced in the late-1990s. The current owners are Brown-Forman and the annual capacity is just over one million litres. 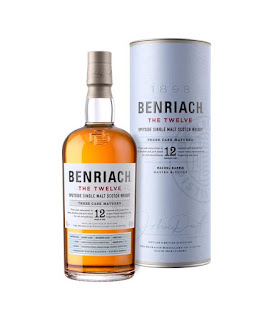 Benriach The Twelve
46% ABV / £44
Pedro Ximenez sherry / bourbon / Ruby Port casks
The colour is deep gold with a tint of amber and the nose is rich and sweet. Aromas of dried fruit (raisins especially) mingle with those of mocha, milk chocolate and coffee. Underneath all of this are further aromas of golden syrup, brown sugar and green apple with hints of cinnamon, plum, damson and maraschino cherry.
On the palate this whisky continues the rich and sweet profile, feeling velvety and viscous. To kick off it is very much fruit that dominate. This is very much a case of juicy fruit versus dried fruit - plums, apple and cherry notes mix with raisins, currants and candied orange peel. Further sweetness comes in the form of honey and milk chocolate notes, and these are balanced by some increasingly vibrant oak spice. This adds warmth and balance (think of cinnamon, nutmeg and a pinch of ginger). The combination, plus a hint of fresh coffee, gives a feel of spiced mocha. Late hints of molasses and something earthy and savoury add even more depth. 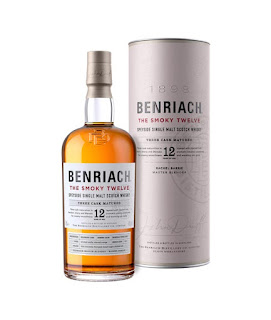 Benriach The Smoky Twelve
46% ABV / £48
Bourbon / sherry / Marsala casks
The colour is deep gold and the nose shows off plenty of gentle smoke to begin with. This has a sweet and earthy, almost heathery feel. This is accentuated by some exaggerated sweetness in the form of sultana, milk chocolate, toffee and honey-like aromas. Further aromas of burnt orange zest and malty cereals add depth and a hint of savoury nature.
On the palate this whisky feels creamy and smooth but with plenty of that soft gentle Highland peat smoke from the nose. This is a big whisky with plenty of sweetness, smoke and spice on show. Golden syrup and moscovado sugar notes combine with green apple and bitter orange peel, along with further notes of milk chocolate and toffee/fudge. The smoke is very well integrated with these notes and balances the sweeter and richer characteristics. Underneath wood and baking spices develop to add a delicious savoury feel and warmth. This sends the finish in a slightly drier direction with cinnamon, white pepper and a hint of gingerbread coming to the fore.
What's the verdict?
These are two more excellent whiskies from the new core range of Benriach. It is so interesting to have two single malts of the same age and from the same distillery, but with one peated and the other non-peated. This is so rare and part of the fascination here. The previous incarnation of the Benriach 12 years old was delicious and difficult to beat in our view, but it has been elevated to a different level for The Twelve.
The addition of Ruby Port character to the sherry casks has added richness and depth, which are balanced by the bourbon cask influence. The Smoky Twelve is a brooding and bold whisky. The gentle Highland peat adds a different dimension and helps to accentuate an already impressive flavour profile. Both are superb and worth a try. Decently priced too.
For our review of Benriach The Original Ten and The Smoky Ten - please click here.
posted by Matt C at 4:48 PM