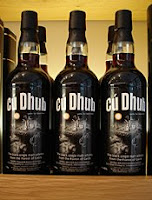 Cú Dhub (pronounced coo-doo) is currently the only black single malt whisky on the market. The whisky is made by the small independently owned Speyside distillery, which lies at the most southern tip of the Speyside region near to the famous ski town of Aviemore. Once the whisky has been matured for approximately five years, it is transported to a Danish company who make it into a black whisky (this is done by adding large amounts of caramel) and then bottling it. Cú Dhub is extremely popular in Denmark and other parts of Scandanavia.

Black whisky was traditionally popular in late Victorian Scotland but died out and remained extinct until the mid 1990s. The Mannochmore distillery started producing the now legendary black whisky Loch Dhu and released this between 1995 and 2005. It is highly sought after by collectors and very rare and expensive. Now, only Cú Dhub remains as an example of this old traditional style of whisky.

Cú Dhub means ‘black dog’ in Gaelic. The name comes from an ancient legend about a pack of black hounds from hell that rampaged through the local Forest of Gaick and used to steal the souls of anyone they encountered, before killing them.

The colour is not ‘black’ but a very dark chocolate brown (think of cola). The nose is a mixture of sweetness and alcohol (imagine nail varnish). It has an odd and slightly unpleasant aroma that mixes molasses (think of burnt brown sugar), yeast extract (hard to pin down but imagine marmite) and aniseed. On the palate, there is an initial sharp sugary sweetness (imagine caramel) followed by more dark molasses, malt extract, some liquorice and something bitter (like a dark chocolate). It is thin in the mouth and feels like drinking a watered down alcoholic treacle. The finish is short and unpleasant with no character of flavour other than that of young burning alcohol. The only thing that hangs around is the brown colour on the inside of the glass.

My memory from when we first tried this, in a remote hotel in the middle of the Highlands, was that it wasn’t too bad. However, judgement may have been impaired by a number of other drams and the odd beer or two before we sampled it all those years ago! It is clearly a young whisky, the addition of the large amount of caramel has done it no favours and it appears more of a novelty than a serious single malt. There is not much positive to say about Cú Dhub, so we’ll leave it there. A bottle will cost around £25 from selected retailers.
posted by Matt C at 5:07 PM