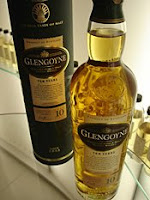 Glengoyne is a distillery in the southern Highlands. It lies about half an hours drive north of Glasgow and is close to the famous Loch Lomond. The distillery was founded in 1833 under its original name of Burnfoot and produces around one million litres of whisky per year. Glengoyne is one of Scotland's most traditional distilleries and is owned by Ian Macleod Distillers. They also produce a small range of rum, gin and vodka there. This 10 years old forms part of the core range, which also includes a 12 years old at cask strength, a 17 and a 21 years old plus some interesting occasional limited releases. A 40 years old will shortly be released for the first time in the distillery's history.

Glengoyne lies on the 'Highland line' (this is an imaginary line that divides the Highland whisky production region from the Lowland region). This line follows the course of a main road and actually runs through the facilities. The distillery lies on the Highland side to the north of the line, with the warehouses being on the Lowland side. It is debated regularly if Glengoyne is technically a Highland or a Lowland whisky, depending on your view about whether the distillation or the storage has more influence on the character. Most people class is as a Highland malt.

The colour is light and straw like. On the nose there is an immediate lovely hit of vanilla, with a delicate mix of fresh fruit (think of crisp apples and pears) and nuts (imagine almonds) coming through. The palate is delicate and refreshing, with the apples, pears and vanilla being joined by some sweet malty cereal grains, something herbal (think of fresh green grass) and just a hint of aniseed right at the end. It feels light and thin in the mouth and has an enjoyable crisp freshness. The finish is quite short, clean and pleasant. This 10 years old is a very enjoyable, light and refreshing whisky that is more reminiscent of the lighter Lowland style whiskies than the heavier Highland malts. It would be a great choice to introduce someone to whisky or to drink on a warm day during summer. This is available in larger supermarkets and independent retailers for between £25-30. The full range can be found at www.glengoyne.com. A superb and quite under rated whisky.
posted by Matt C at 4:39 PM

Thanks very much for the very positive review - very pleased to hear you liked it.

We also sell the 10 YO (and indeed the full range) from our web site at www.glengoyne.com.

I tried the 17 year old at the (South African) Whisky Live Festival last year, I remembering really enjoying it. Don't see it much in the shops here unfortunately.