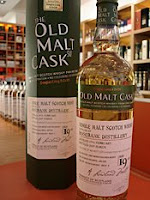 Rosebank is a distillery that was found in the Lowlands whisky region of Scotland, between the cities of Glasgow and Edinburgh. The distillery has been closed since 1993, although most of the buildings remain intact and rumours regularly circulate that the current owners, Diageo, will eventually re-open Rosebank for production. Currently, part of the distillery is a restuarant, its car park and a housing development. The stocks of Rosebank whisky are decreasing with time and with this the desirability and prices are increasing. Rosebank is well reknowned within the whisky world and has a cult following of drinkers and collectors alike.

The distillery was originally founded in 1840, although distillation was illegally taking place on the same site as far back as the 1790s. Rosebank operated the triple distillation method (where the spirit gets passed through the stills three times) that was traditionally used in the Lowlands. This is compared to double distillation that occurs in the rest of Scotland. This practice has largely died out and only Auchentoshan of the surviving Lowland distilleries produce whisky that is triple distilled. Rosebank was also affectionately known as 'The Queen of the Lowlands' within the whisky industry.

This bottling is released at 19 years of age by the Glasgow based independent bottling company Douglas Laing & Co. Independent bottlings are one of the best ways to buy Rosebank as Diageo sporadically release the whiskies themselves - usually at 12 and 25 years old. The colour is a pale lemon yellow and the nose is enticing and aromatic with a lovely mix of vanilla, sweet honey, grasses (think of dried hay) and lemons. On the palate, this is creamy and full of that vanilla and honey with a sugary burst at the very beginning (imagine icing or icing sugar). The feeling in the mouth is fresh and delicate with the herbal grassiness and zingy citrus from the nose coming through. With water (this is bottled at 50% ABV so thought I would try it), the nose and palate both become more floral (think of honeysuckle flowers) and scented like a feminine perfume. The finish is short but crisp and refreshing and leaves your mouth watering and wanting more!

This Rosebank is an excellent whisky and the best Rosebank that has been tasted to date. The age has given a great complexity and balance. It is also one of the best whiskies from an independent bottling company that has been tasted. The bottles are limited (just 444 in this batch) but are well worth searching out and buying. It should cost £80 from selected whisky retailers. Truly fantastic stuff.
posted by Matt C at 3:54 PM

As far as I know, most of the copper equipment was recently stolen from Rosebank distillery. It looks like this wonderful distillery will never be able to resume production...

That's right, Ruben. They found out just after Christmas that vandals had been breaking in over a period of time and stealing the copper bit by bit. So those beautiful stills that made all that wonderful whisky are gone forever :(