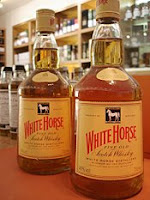 White Horse is an award winning blended scotch whisky. It was first produced by James Logan Mackie in 1861 while he was the owner of the Lagavulin distillery on the island of Islay. The name was taken from one of Mackie's favourite hotels - the White Horse Cellar Inn in Edinburgh - and the logo is a copy of the hotel's old pub sign. The current White Horse brand is owned by drinks giant Diageo and their promotional and distribution power has propelled the whisky in to the world's top 10 for blended scotch sales.

White Horse is made from a blend of 60% grain whisky and 40% single malt whisky. Lagavulin is at the heart of the blend, as it has been since Mackie first produced it, but other notable distilleries included are Caol Ila, Craigellachie, Glen Elgin, Linkwood and Talisker. Another interesting fact is that in 1924 White Horse became the first whisky ever to be bottled with a screw top cap instead of a cork.

The colour is a golden yellow and the nose is fresh and promising. There are some initial sweet cereal grain and caramel notes followed by some fresh green fruit (think of apples) and vanilla. After this comes a whiff of earthy, peaty smoke. The combination gives a feeling of warmth. On the palate, that initial sweetness is present again but is more sugary (think of burnt sugar and honey) this time. There is again lots of vanilla and the smokiness is more prominent (imagine damp moss and wet earth). It is quite lively and vibrant, which suggests some younger whisky is present in the blend and an interesting herbal note (think of dried grasses) comes through at the end. The finish is reasonably pleasant and refreshing but short, with the overall sweetness being overtaken by the herbal grassy note, a salty tang and earthy peat.

This whisky is pleasant and would be great with a mixer or in a whisky cocktail, as it has elements of interest but lacks any real complexity. Having said that, it is refreshing, palate cleansing and reasonably enjoyable when drunk on its own. It was slightly less smoky than expected considering it has three heavy weight smoky whiskies - Caol Ila, Lagavulin and Talisker - in it. White Horse is widely available around the world, with a bottle costing between £15-20 in the UK.
posted by Matt C at 4:21 PM

I have been drinking White Horse for at least 35 years. It has always been a moderately priced scotch. All of a sudden at the Shop Rite Wines and Spirits in Caldwell, NJ. they are pricing White Horse above Dewars. Someone needs to visit this liquer store and advise them that it is not right to mark up White Horse to a level where people by Dewars when they would prefer White Horse. This is northern NJ please give them a little discussion so that this price gouging ends.

Dear WillyC
Thanks for the comment. I have looked to see if there may be any reason for such an increase but have not found one. Not being in the States doesn't help. Ofcause, it is each individual retailers prerogative as to what they charge for their whisky. Also, have you had a tax increase lately? This could be another reason as we have had 2 in the last year in the UK that has added £3-4 to each bottle.
Sorry I couldn't help more,
Matt

Same thing has happened in New York with the White Horse price explosion. Reason? The distributors are now far fewer, down to a very few giant ones in fact. All they care about is squeezing more money out of customers. Don