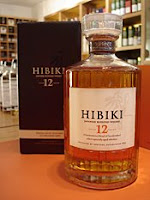 The Hibiki are a series of blended whiskies from the Japanese company Suntory. They rose to prominence in 2008 when the 30 years old version won the 'Best Blended Whisky' category at the World Whisky Awards - the first time that a Japanese whisky had won such a prestigious prize. Suntory own two whisky distilleries in Japan - Yamazaki (Japan's oldest founded in 1923) and Hakushu, which was founded during the 1970s. The Hibiki are blends of single malts and grain whisky from these two distilleries and are released with minimum ages of 17 and 30 years. The 12 years old is a new addition to the range and has just been released in Europe, with London staged the official launch. Hibiki means 'harmony' in Japanese.

The first thing to note with the Hibiki series is the extraordinary bottle. It is a great mix of a whisky decanter and 1970s retro design. The 17 and 30 years old in the series are multi award winning whiskies so the 12 years old has a lot to live up to! Both are dark with sherry cask influence, but this is much lighter and fresher. The colour is a golden amber and the nose is very promising. It is fragrant with a fruitiness that is fresh rather than dried fruit (think of stone fruits like cherries and plums). There is vanilla and sweetness (think of honey) prominent also, with a hint of a peppery spiciness (imagine ground white pepper). The palate is refreshing, cleansing and mellow with lots of those fresh juicy fruit notes present (especially the plums) and these are underpinned by a soft barley sweetness. It has a crisp, short finish with that peppery spice coming through. It makes your mouth water and makes you want to drink some more!

The Hibiki 12 years old is a promising and very smooth whisky that we later discovered was partly matured in a Japanese plum liqueur cask (the liqueur is called Umeshu). This explains that fresh plumy fruitiness that is present. It would be a great one to introduce someone to whisky as it is light, refreshing and has interesting, almost unique, characteristics. This is available in specialist whisky retailers and some Japanese supermarkets and should cost £45-50 for bottle.
posted by Matt C at 1:59 PM

Just a quick note: hibiki (響) means echo or resonance in Japanese. Great name for a whiskey, and it's definitely one that I hope to get my hands on at some point.

Someone needs to get on importing these to the US.

Thanks for that comment. Its interesting that all Suntory's literature and everything else that you read about Hibiki says that it means 'harmony', so its good to know otherwise.

Hmm, after a bit of further investigation, it looks like "harmony" can be a definition of the word, but more in the sense of musical harmony than peacefulness. So Suntory's literature is right, in a way.

i have one hibiki 12 and all i can say is : you need to taste it ! I really in love with this one due to his fruty & fresh flavour... a must have for me